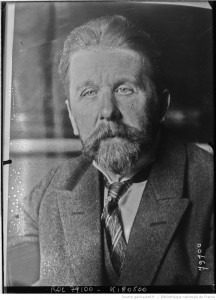 Alexander Tikhonovich Grechaninov (1864-1956) was a contemporary of Richard Strauss, and he lived to the ripe old age of 92. Born in Moscow, he became a U.S. citizen in 1949 and spent his final days in New York City. Unlike Richard Strauss, however, Grechaninov’s name was quickly forgotten. In his autobiography he writes, “I am not one of those fortunate people whose path of life is strewn with roses. From the very first I had to undergo a struggle with my father who did not want me to become a musician. Later, at the Conservatory, some of my teachers said I lacked talent. Even when I was well along in my career I had no support from great musicians who were my contemporaries. I must admit that the cause of this was my insurmountable shyness. I always imagined that my company was tedious and uninteresting to others, and so I avoided seeing people.” During his long and highly productive career, this prolific and versatile composer authored almost 1000 works, including operas, symphonies, church and chamber music, and a large number of songs. His large output easily attests to his mastery of traditional musical techniques and to his lyrical gift. Much of his music is rooted in the Russian nationalist tradition of Borodin, Tchaikovsky and Rimsky-Korsakov, and during a time of extensive modernist experimentations, his compositions were increasingly viewed as outdated.

Political and social unrest at the beginning of the 20th century forced Grechaninov to first immigrate to Paris, and subsequently make his home in the United States. Regardless of geographic location, however, he remained steadfastly committed to Russian music and culture. The musical treasures of Russian folk song provided the inspiration for his melodic inspiration, while the traditional chants of the Russian Orthodox Church played an important part in establishing his spiritual identity. Grechaninov refused to make concessions to modern ideas of harmony, but gradually derived and evolved his harmonic language from the so-called “Russian National School” that established itself towards the turn of the century. This influence is readily heard in his five completed symphonies, which radiate festive yet eloquent Russian moods. Completely forgoing any notion of virtuosity, his chamber music and works for solo piano regard the musical instruments as human voices that offer natural and direct forms of musical expression. Grechaninov wrote three works for the operatic stage. Dobrinya Nikitich—based on one of the most popular epic knights of Russian folklore—combines elements of national lyricism with expressive narrative, while Sister Beatrice with it’s libretto based on the Maurice Maeterlinck play, musically explores the psychological drama of a 13th century French convent. At the ripe old age of 80, Grechaninov wrote the comic opera The Marriage! Based on a play by Nikolai Gogol, the hesitant bridegroom jumps out of the window to save himself from impending matrimony!

In Grechaninov’s oeuvre, music for children plays an important role. The same is true for his extensive collection of songs that increasingly adopt a nostalgic and introspective mood. However, Grechaninov is probably best known for his music for the Eastern Orthodox Church. Here he continues the ancestral Russian legacy of unaccompanied choral sound that serves as the primary vehicle for liturgical worship and poetic expression. His 4 Liturgies of St. John Chrysostom contain some of his most moving and spiritually touching music, and the Passion Week Op. 58 is based on 13 Slavic texts used during Holy Week services. The work is not liturgical, but represents an independent set of choruses that is designed for concert performance. Almost symphonic in sound and range, this is cappella choral music of great harmonic richness and breathtaking sonorities!