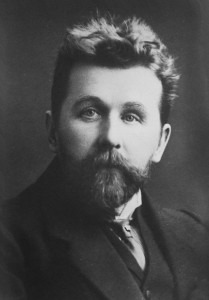 Alexander Tikhonovich Grechaninov (1864-1956) wasn’t entirely happy to study at the Moscow Conservatory. Although he took composition lessons from Sergey Taneyev and sat in the counterpoint class with Arensky, his initial attempts at composition were judged to be a waste of time! Only when he received a scholarship to study at the St. Petersburg Conservatory with Rimsky-Korsakov did his career blossom. A Concert Overture was well received, and his first String Quartet won a prize in the Belyayev Chamber Music Competition in 1894. However, the highlight of his early career was the performance of his First Symphony with Rimsky-Korsakov conducting the premiere in 1895. The work bears a dedication to his teacher, as “a token of deep respect and gratitude.” Despite appearances to the contrary, Rimsky-Korsakov had a somewhat low opinion of the work. “It’s really not good! If someone who has a natural inclination to compose in the style of Rubinstein and writes fairly well in this style, suddenly takes a fancy to Borodin and begins to compose in his style, it won’t work.” Despite his teacher’s reservations, the music shows competence in structure and orchestration, and the pleasant use of Russian thematic materials.

Alexander Grechaninov: Symphony No. 1 in B minor, Op. 6
Upon graduation, Grechaninov was invited to teach music theory at a music school in Moscow founded by the Gnessin sisters. Since there was little choral music for children in the Russian language, Grechaninov set to work and initially composed a collection of six nursery rhymes for two voices. “It became an established rule that every year I compose two or three new songs for public concerts to be performed by the children.”
These vocal miniatures were highly successful and quickly supplemented by elementary piano pieces collected and published as Children’s Albums. In addition, he also wrote songs about children for adults, among them a charming setting of ten miniature poems titled Snowflakes.

Alexander Grechaninov: Snowflakes, Op. 47
Although his songs and piano miniatures achieved a modicum of popularity and success, Grechaninov’s chamber music remains as a whole completely neglected. In all, he wrote 10 major pieces for chamber ensemble, among them 4 string quartets, 2 clarinet sonatas, a violin and a cello sonata, and 2 piano trios. Critics have suggested, “These lesser-known works reveal his wide-ranging and creative artistry that easily rivals the works of his better-known compatriot composers.” Grechaninov remained in Russia for several years after the October Revolution, but eventually settled in Paris in 1925. His Piano Trio No. 2 dates from 1930 and is influenced by some of the moderate musical streams that also affected Igor Stravinsky and Sergei Prokofiev. Cast in three relatively brief movements, the work presents expertly crafted musical arguments built on modal uncertainty.

Alexander Grechaninov: Piano Trio No. 2 in G major, Op. 138
Grechaninov is internationally probably best known for his sacred choral pieces, stylistically and technically derived from Russian folk music. The Liturgies of St. John Chrysostom play an important part in the Russian Orthodox Church service, and they are a central part of Grechaninov’s extensive sacred output. In all, he composed four complete settings, with his final effort dating from his time in New York in 1943. His principle aim was “to create a harmonic dress for our simply church songs that is better suited to the Russian style.” His setting was meant to be accessible to amateurs with little experience in reading music. “When they listen to this new musical style, the performers will come to love it; along with the performers and the worshippers will also understand it, and they will turn away once and for all from the German-Italian influence which so ill becomes our church.”