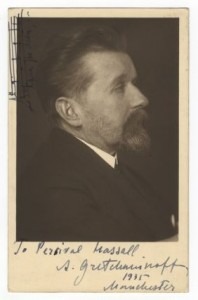 Simultaneously completing his compositional requirements at the St. Petersburg Conservatory and working as a freelance music teacher, Alexander Grechaninov and Vera Ivanovna Röhrberg had trouble making ends meet. Luckily, Vera received a small monthly allowance from her father so that the young couple was able to rent a small country house on the Volga River. “The cottage was very small. Only one room was large enough for an upright piano. Our bedroom was extremely small and dark; the mattress was placed on a bed made of wooden planks. It was an uncomfortable resting place, but we were young and carefree.” Inspired by this rustic lifestyle, Grechaninov scored his first musical successes with his 1st String Quartet and his 1st Symphonic essay, and he started work on an opera. Money, however, was still a problem, and the couple eventually moved to Moscow in 1896 to take lodgings with the Röhrberg family. “Life with my in-laws was very pleasant,” writes Grechaninov. “They were all passionately devoted to music, attended symphony concerts and played music at home. Vera’s sisters were good pianists, and we presented concerts in the salon where we had two pianos.”

Alexander and Vera desperately wanted children, but regrettably, it was not to be. One day, a pretty peasant girl bearing an infant was hired as a cook. “The child, far from being a burden, brought great joy into our lives, such as we had never experienced before. We were delighted to commune with this childish soul. Her name was Olga, but we called her Oletchka. She was only a year old, and was just beginning to walk and talk.” Little Oletchka became an integral part of the household, and Gretchaninov decided to adopt the child. He secured permission from the girl’s mother and from her father—who was entirely indifferent to the child’s welfare—but Vera Ivanovna violently objected. Apparently, she was afraid to assume responsibility for the child of a stranger, and no amount of pleading could soften her heart. She insisted that they could not bring a child into her parent’s house, and the couple eventually departed leaving Oletchka behind. Only a couple weeks later, the couple learned that Oletchka had unexpectedly died of scarlet fever. “My grief was inconsolable,” Grechaninov writes, “had we taken Oletchka, she might have lived and been a source of so much joy to us. I mourned this lovable creature for a long, long time.”

Although he never openly articulated his true feelings, Grechaninov secretly blamed Vera Ivanovna for Oletchka’s death. The couple continued to live and travel together, but an emotional coolness started to affect the relationship. One faithful evening, the Grechaninov’s played host to the painter Alexander Sredin and his young, charming and beautiful wife Maria Grigorievna. Grechaninov writes in his autobiography, “My wife, Vera Ivanovna, ever on guard for our domestic peace, showed at the very first meeting with the Sredin’s her displeasure at this friendship. She immediately realized, and not without good reason, that Maria Grigorievna was a rival, dangerous to our happiness. The deep impression that Maria Grigorievna made on me, which, in the end, proved so decisive, could hardly escape my wife’s observant and jealous eye.” For the next three and a half years, Gretchaninov and Maria carried on with a clandestine affair that eventually spelled the end of both their marriages. Vera Ivanovna was keenly aware that the affair was ongoing, and in the end, “she finally decided to give me my freedom. Years of torment passed, and our lives were at last united.” During this period of intense emotional crisis, Grechaninov composed his two song cycles Fleurs du Mal and Poeme Dramatique, as well as Feuilles mortes with string quartet accompaniment. Grechaninov and Maria Grigorievna married in 1912, and the union remained childless.