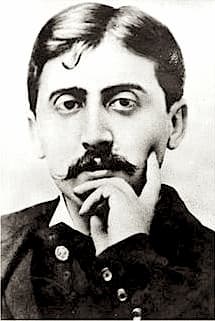 Born 150 years ago in Paris, Marcel Proust was a sickly child and he suffered from poor health for most of his short life. Yet his almost inexhaustible complexity as a novelist, critic and essayist has reverberated through virtually every stream of twentieth and twenty-first century critical thought on literature and culture. His most prominent novel “À la recherche du temps perdu” (In Search of Lost Time) emerged in seven volumes and follows the narrator’s recollections of childhood and experiences into adulthood. Situated within aristocratic France, the vast novel reflects on the loss of time and lack of meaning to the world. It has been called “the most respected novel of the twentieth century,” and music played an important part in expanding and enriching the “range of his own literary language through figure and allusion.” In fact, the Proust novel also contains a musical puzzle that has intrigued scholars and connoisseurs ever since the publication of the epic work in 1913. 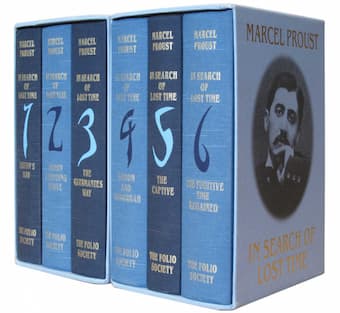 In Search Of Lost Time © beforeikick.wordpress.com

Proust was interested in the power of music to trigger involuntary memory, and when a few musical notes drift through the air at a party, the socialite Charles Swann—the central character in Proust’s novel—triggers tumultuous emotions. Swann associated a musical phrase in the piece of music with his love for Odette de Crécy. “It was on one of those days that Odette happened to play for me the passage in Vinteuil’s sonata that contained the little phrase of which Swann had been so fond. But often one hears nothing when one listens for the first time to a piece of music that is at all complicated … For our memory, relatively to the complexity of the impressions which it has to face while we are listening, is infinitesimal, as brief as the memory of a man who in his sleep thinks of a thousand things and at once forgets them, or as that of a man in his second childhood who cannot recall a minute afterwards what one has just said to him…” The novel identifies the fictional composer Vinteuil, but we do not actually learn his first name. But we do know that Vinteuil composed a violin sonata, and that he is also the author of a septet. And we also do know that the sonata is a contemporary work, so which sonata did Proust reference in his novel? 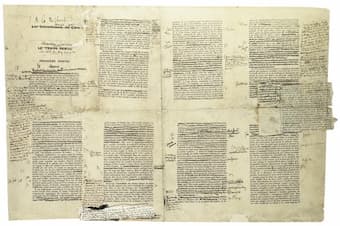 A first galley proof of In Search of Lost Time © Wikipedia

It has been suggested that the French composer Camille Saint-Saëns must be the real musician behind the mystery piece. And there is good reason for that assumption. In his earlier unfinished novel “Jean Santeuil,” written in the 1890s, Proust does identify the Saint-Saëns’ Violin Sonata No. 1. Proust was not a musician, but his description is sufficiently detailed to suggest a real model. César Franck and Saint-Saëns have been identified as possible candidates, but the second violin sonata by Johannes Brahms has also been suggested. A character in the novel makes reference to Beethoven’s Ninth and to Wagner’s “Meistersinger.” A French musicologist writes, “although we naturally think of Beethoven and Wagner, we should also understand that Brahms’ Ninth Sonata (Op. 100 is the ninth in chronology) is dubbed “Meistersinger” for its Wagnerian accents. And the little passage in F-sharp minor, which appears three times to end the piece, is thus described in Proust’s novel. 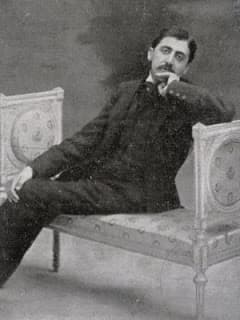 Recently, the sisters Maria and Nathalia Milstein have proposed an interesting hypothesis. They suggest that the musical theme that drove Charles Swann crazy comes from a less famous work, the Sonata for violin and piano in D minor by Gabriel Pierné. The artists suggest, “it is gorgeous and very much composed along the lines described in the book… We know that the famous little phrase comes back in the later movement, so hearing the Pierné sonata kind of fits.” As Proust writes, “Swann sought in the little phrase for a meaning to which his intelligence could not descend, with what a strange frenzy of intoxication did he strip bare his innermost soul of the whole armor of reason and make it pass unattended through the dark filter of sound!” Whatever his model, Proust granted music a pivotal role in a work of literature. “His vision of the potential unity and transformative power of the arts…shaped the European modernist tradition that followed him.” A leading literary critic writes, “Music as performance, as topic of debate, as catalyst of memory, emotion, and desire, plays an obbligato accompaniment to the interpersonal drama of the Proustian social world: its hilarity, its pathos, its vacuity, its sensuality, its cruelty.”