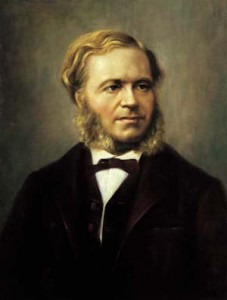 César Franck’s reputation primarily rests on a few large-scale orchestral and instrumental works of his later years. Among his most respected and finest works is the Violin Sonata composed in 1886 as a wedding present for the Belgian violinist Eugène Ysaÿe. The origins of this composition, however, seem to date from a decade earlier, when Franck promised Cosima von Bülow—the illegitimate daughter of Franz Liszt and later the wife of Richard Wagner—a sonata for violin and piano. Cosima, at this point wife of the conductor Hans von Bülow, had been highly supportive of Franck’s compositions and enthusiastically advocated their performance in Germany. In this work, according to Leon Botstein, “Franck created an enduring work that emerged from his intense interest in color and the spatial atmosphere of sound.”

César Franck: Violin Sonata in A
The majority of César Franck’s extensive compositional oeuvre is associated with his employment as organist at Saint Clotilde Basilica in Paris, a position he held for over 30 years. Besides laying the foundations for the emergence of a new and unique musical genre known as the “Organ Symphony,” Franck also created a corpus of organ music that rivals—in scope and quality—the compositions of J. S. Bach. Among his most popular organ works is the Prelude, Fugue and Variations, Op. 18, composed at the monumental three-manual grand organ installed in the church in 1859. The pastoral “Prélude” is dedicated to Camille Saint-Saëns, while a rather austere fugue—connected via a short interlude of chordal harmony—is highly reminiscent of the dramatic mastery of J.S. Bach. Finally, a dominant pedal gracefully gives way to a charming set of variations based on the pastoral opening.

When César Franck first introduced his piano trios to the Parisian public, a critic venomously wrote, “These works try the patience of French audiences who, despite their proverbial courtesy, desert in the face of the immeasurable boredom of these trios.” Franck was only fifteen when he composed the “Trio de salon,” and the work musically presents an attractive amalgam of the musical influences of his youth. Melodic fragments reminiscent of Beethoven, Schubert and Mendelssohn mingle with quotations from Kuhlau and Moscheles. As his student Vincent d’Indy subsequently remarked, “Everything in Franck sings, and sings all the time.”

César Franck: Piano Trio No. 2, Op.1 No. 2 “Trio de salon”
César Franck has been described as “a man of utmost humility, simplicity, reverence and industry.” This apparent simplicity and reverence most prominently emerges in a substantial number of sacred vocal compositions. Among his most celebrated compositions is the musical setting of Panis Angelicus (Bread of Angels) to a text by Saint Thomas Aquinas for the Feast of Corpus Christi. An extended instrumental introduction, symphonic in breadth and scope, exposes a rich tapestry of thematic materials. Skillfully intermingling rhetorical and passive elements, Franck’s setting is described as invoking a sense of “serene anxiety.” This musical paradox also governs the vocal line, as the soloist performs a melody of angelic lyricism enriched by surprising harmonic inflection and the occasional strain of chromatic intonation.