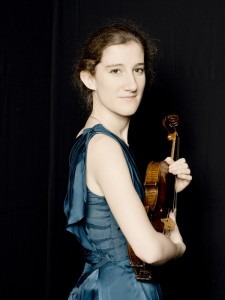 Moscow-born violinist Maria Milstein balances a successful solo career with the work of her chamber group the Van Baerle Trio. I speak to Maria in the days following a week with six concerts with the group, where she now has a bit of downtime before her next engagements in Germany and the Netherlands.

The trio forms a large part of her life; named after the street where the world-famous Concertgebouw concert hall is based, the trio was actually formed as soon as Maria moved to Amsterdam in 2004 to study. The players were simply placed together for a chamber music project at the conservatoire, and this same group went on to become the winners of the Vriendenkrans Competition, and recipients of the audience prizes at the ARD and Lyon International Chamber Music Competitions.

‘I didn’t know anyone when I arrived,’ Maria recalls. ‘The others knew each other for a year, but didn’t know me – it was an experiment!’

In fact, the year when the trio decided to apply for masterclasses and competitions was a time of separation: Maria went to London for an exchange year, studying at the Guildhall School of Music and Drama, and Gideon den Herder, the trio’s cellist, spent a year in Salzburg.

This was not a problem for the players. ‘In the end,’ says Maria, ‘studying is always temporary and since the trio was getting better and better, there was more and more certainty that it would continue.’

Outside the trio, Maria recently released her first CD, Sounds of War, recorded with pianist Hanna Shybayeva. On the CD is the first Prokofiev sonata, along with the Poulenc and Janacek sonatas, all written during wartime but with very different perspectives. ‘They’re three composers with extremely different languages, but it was fascinating to put them together,’ Maria explains.

Maria’s relationship with the great violin repertoire goes right back to her childhood. The daughter of a pianist father and violist mother who also taught the violin, Maria grew up in a house surrounded by music. 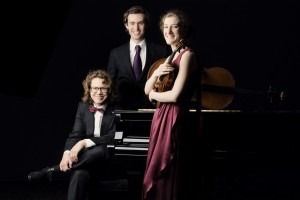 ‘I remember piano music all the time,’ recalls Maria, ‘and I also remember my mother practising.’ Maria was 5 when she got her first violin, and after a couple of months at the local music school, the family left Russia in 1991. ‘It was a period of great uncertainty in Russia. My parents were seeing that music was not enough to feed us.

‘At that moment, the borders were still quite open, but it was completely unclear what would come.’ Maria’s mother won an orchestra job in Lyon, so Maria continued studying with her mother in France, amongst learning a new language and new way of life.

‘It was a very wise decision to leave,’ Maria says. ‘I don’t know how my parents would have survived there at that time.’

Nowadays, Maria is based in Amsterdam, where alongside her work with the trio, she holds a teaching position at the conservatoire, where she learns as much as her students.

‘When I started teaching, it was a bit of an unknown world – it was as much discovering myself as discovering the student. When you see something from someone else’s perspective, everything suddenly becomes much clearer.’

‘I want to make it as simple as possible for them to express what they want to express. I obviously give advice about interpretation when I think it’s necessary, but I think I should as much as possible let them find their own way.’

Time away from work is as important as the work itself – and for this reason, Maria rarely listens to music when she is alone. In her spare time, Maria enjoys reading, and although it can be hard to keep consistent with a hectic schedule, ‘it does help you to switch off and to enjoy something great.’ She is currently battling through Thomas Mann’s The Magic Mountain, although the recent week with the trio has put things on hold.

An exciting upcoming project for Maria will be a new recording, sponsored by the Borletti-Buitoni Trust, of whom Maria was selected to be a Fellow in 2016. Maria is also incredibly grateful to be supported by the Dutch Musical Instruments Foundation, who enable her to play on a Michelangelo Bergonzi violin previously owned by Herman Krebbers, the concertmaster of the Concertgebouw Orchestra.