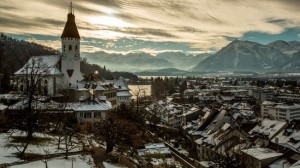 The Hungarian violinist, composer, conductor and educator Joseph Joachim (1831-1907) was one of the most influential musical personalities of his time. At the tender age of 12, with Mendelssohn conducting, he performed the Beethoven violin concerto in London, and later served as concertmaster to Franz Liszt in Weimar. He introduced the painfully shy Johannes Brahms (1833-1897) to Robert Schumann, and thus began a friendship that was to last for more than thirty years. The one serious disagreement between them arose as the result of Joachim accusing his wife Amalie Schneeweiss of adultery. Brahms believing in her innocence wrote a consolatory letter to Amalie, which she produced during the divorce proceedings. The judge agreed with Brahms’s assessment, and a furious Joachim immediately broke off all contact with the composer. After nearly six years of silence, and apparently in an attempt to appease his estranged friend, Brahms drafted a series of compositions for the violin.

Brahms was spending the summer of 1886 in Thun in the Bernese Oberland, Switzerland. He regularly visited his friend Josef Victor Widmann, a Swiss pastor and poet who lived in nearby Berne. In turn, he received visits from the poet Klaus Groth and the young German contralto Hermine Spies. Both Groth and Brahms were enamored of Spies, and the courting trio enjoyed long walks in the countryside or regaled in rowing across the lake. Invigorated by the genial atmosphere and alpine splendor, Brahms suggested that the area was “so full of melodies that one has to be careful not to step on them.” For one, he sent a succinct postcard to Joachim suggesting, “I should like to send you some news of an artistic nature which I heartily hope might more or less interest you.” As we know, this new artistic endeavor turned out to be the Double Concerto, Op. 102, which eventually had the desired effect of reuniting him with Joachim. In addition, during his time in Thun Brahms wrote the Cello Sonata No. 2 in F major, Op. 99, the Piano Trio No. 3 in C minor, Op. 101, and various songs. Brahms also drafted the Third Violin Sonata in D minor, Op. 108, and completed the most lyrical of his three sonatas for violin and piano, the Sonata No. 2 in A major, Op. 100.

Johannes Brahms: Sonata for Violin and Piano No 2 in A major, Op. 100 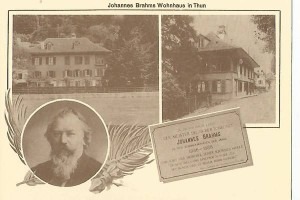 This glorious work tenderly reveals the introspective and contemplative side of the composer’s personality. Over gently strumming chords in the piano, the violin rhapsodically introduces a seemingly endless melody. In this conversational interchange the themes flow seamlessly between the instruments, and a development of agitated intensity quickly makes way for the restatements of the opening strains. Tellingly, the second subject uses motives from the song “Wie Melodien zieht es mir leise durch den Sinn (Like melodies it steals softly through my mind,)” which Brahms had composed that summer. 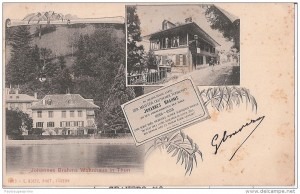 Not surprisingly, the words are by Klaus Groth and the intended performer was Hermine Spies. Brahms combined the roles of the Adagio and Scherzo in the middle movement, as a tranquil yet probing “Andante” is contrasted by a folk-like “Vivace.” Using a musical quotation from an earlier song, the concluding “Allegretto grazioso” unfolds as a graceful and elegant rondo containing moments of sudden passionate outbursts and emotional upheaval. Clara Schumann famously wrote to Brahms, “I wish the last movement could accompany me in my journey from here to the next world.”

The Sonata will be performed on 12 March 2016 by Ji-young Lim and Dasol Kim at the 44th Hong Kong Arts Festival.