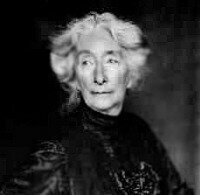 Richard Strauss first met Francesca Gaetana Cosima Liszt-Bülow Wagner in March 1889. Of all his acquaintances and friendships during this period of his life, this one was to have the most important consequences for his immediate future. Alexander Ritter had introduced Strauss to Wagner’s writings and converted him to the “music of the future.” As such, the young composer was predictably overjoyed when Julius Kniese — Cosima’s musical advisor — invited Strauss to take part in the Bayreuth Festival as a musical assistant. Proudly he told his family, that he had even been invited to dine with Cosima at Wahnfried. “I am in great favor with Frau Wagner, I’m the only one besides Levi and Mottl who plays in the piano rehearsals.” After the festival was over, Cosima went through Tannhäuser and Lohengrin with him, the first Wagner scores he was to rehearse at his new posting in Weimar. 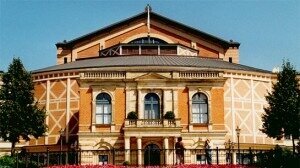 Richard Strauss: Guntram, “Fass ich sie bang”
Once in Weimar, he devoted all his energies to his first major undertaking, the rehearsals for Lohengrin. He excitedly wrote to Cosima, “he had been able to give the work two five-hour orchestral rehearsals, one rehearsal to plot stage movement, and a series of rehearsals with the piano for the soloist and the chorus.” After the performance attended by Cosima, Richard writes: “Lohengrin was a brilliant success. Colossal praise from Frau W., who was quite enchanted and said that only in Karlsruhe had she been so profoundly impressed. All the tempos wonderful, the modulations very sensitive and unobtrusive, there was great breadth in the performance; the orchestra had been finely shaded and discreet. In short, she was full of praise, quite moved and even kissed me.” Strauss took great care to maintain his contact with Cosima Wagner, and often reiterated the expression of his devotion and gratitude. His overriding ambition was to champion Wagner’s work in the theatre. He certainly tried his best to please Cosima. For a memorial concert he replaced the Brahms German Requiem with Liszt’s Héroïde funèbre. Cosima was greatly impressed and called it a “brilliant exploit.” And when talk turned to Anton Bruckner, Strauss would echo Cosima’s opinion and suggest, “being trumpeted as a genius makes Bruckner a simpleton.”

It is hard to imagine that Strauss was not aware of “Cosima’s toxic mixture of quasi-religious devotion, self-definition through her husband’s accomplishments, virulent judgmentalism, and megalomaniac confidence;” after all, she was hugely important for the beginning stages of his career. After Richard Wagner’s death, Cosima stayed in Bayreuth and wore widow’s weeds every day for the next 47 years, even to her children’s weddings. “She refused to allow Wagner’s piano to be played or Wagner’s chair to be sat in,” and decided that the Bayreuth Festival should become Wagner’s artistic testimony.” To that end, she surrounded herself with unquestioning supporters, and maintained their loyalty with a mixture of philosophical gibberish and virulent anti-Semitism. As Strauss attempted to follow his own musical direction, relations became somewhat strained. When he performed his new Don Juan for her on the piano, Cosima was bitterly disappointed: “It seemed to me, in your Don Juan, that you were more interested in the presentation of your characters than in the way your characters had spoken to you. I call that the play of intelligence against emotions.” Cosima was clearly offended by the blatantly erotic subject matter and the concreteness of the musical narrative. And when Strauss married Pauline de Ahna — who sang the role of Elisabeth in the first performance of Guntram — Cosima dropped him like a hot potato! She might have even started the famous bon-mon that was making its way into all the major newspapers of the day: “If it has to be Richard, then make it Wagner, but if it has to be Strauss, make sure it’s Johann!”