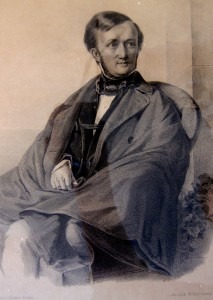 In his most renowned psychoanalytic conjecture — appropriately dubbed the “Oedipus complex” — Sigmund Freud suggested that a child’s unconscious mind projects the desire to sexually possess the mother, and kill the father. Freud derived his theory from ancient Greek mythology; however, he certainly had some more recent and highly relevant contemporary examples at hand. Take for example Richard Wagner, who disclosed in his autobiography Mein Leben (My Life) that his “liebes Mütterlein” was the only person he had ever loved deeply. In fact, he was so fond of his mother that throughout his life “he never could see a Christmas tree alight without tears.”

Richard was born in Leipzig, the ninth child of Carl Friedrich Wagner and Johanna Rosine, nee Patz. Carl Friedrich, a police official working for the occupying French forces, died before Richard’s first birthday and mummy remarried the following year. In quick succession, mummy gave birth to an addition daughter and a son, and Richard desperately vied for attention. Being one of eleven, he often felt neglected, but found solace fondling the velvet dresses and silken panties of his mother and his five older sisters. “Their clothes exercised a subtle charm over my imagination, nay, my heart beat madly at the very touch of their dresses.” For Richard, velvet “encompassed maternal warmth,” and silk “had an electrifying effect on his skin.” Apparently, he not only liked to touch women’s clothes, he also liked to wear them. In an 1877 letter recently come to light, Richard details the cut of a dress to a firm of Milanese couturiers. I want “something graceful for evenings at home. The bodice will have a high collar, with a lace jabot and ribbons; close-fitting sleeves; the dress trimmed with puffed flounces — of the same satin material — no basque at the front (the dress must be very wide and have a train) but a rich bustle with a bow at the back, like the one at the front) … And so: richness of the material, width, ruches, flounces, bustles, ribbons – all to the good: but none of those basques attached by means of pins etc.” Richard might conceivably have ordered the dress for this then-wife Cosima, but she never mentioned the arrival of these items in her meticulously kept daily journal. It has been suggested that Richard ordered the dress for himself, needing an “aura of femininity to stimulate his senses.” This obviously pronounced feminine side already manifested itself very early in life. 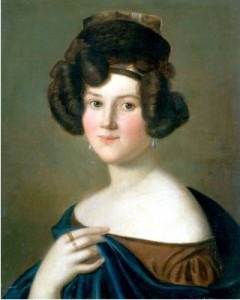 Richard Wagner
Polonaise in D major
At the age of four, Richard made his stage debut in Schiller’s William Tell, deputizing for a girl. And in his early teenage years, he would spend hours stroking the hair of a “beautiful young girl named Amilia Hoffmann.” On occasion, he even pretended to be asleep so “that I might be carried up to bed by the girls. I found, to my surprise, their attention under these circumstances brought me into closer and more gratifying proximity with them.” However, when Richard laid eyes on the impossibly beautiful daughter of a Jewish banker, it was love at first sight. Leah David had jet-black eyes and hair, and Richard was very fond of caressing Leah’s poodle. Richard had competition in the form of Leah’s cousin, who was a pianist. When Richard criticized his playing, he was challenged to a musical duel and soundly defeated. Apparently Richard lost his temper, and responded with a violent outburst and rude language that left the guests speechless. He stormed out, and when he attempted to return two days later, he was refused admittance. The very next day, he received a letter from Leah informing him that she would shortly marry her piano-playing cousin. Wager later wrote, “It was my first love sorrow, and I thought I should never forget it, but after all, I think I cared more for the dog than for the Jewess.” In his lifetime, Wager owned more than 30 dogs — he even had engraved and dedicated gravestones produced for his most beloved “Robber” and “Russ,” and his later writings are known for his fierce hatred of the Jewish race. Although scholars have suggested a correlation between exaggerated love for dogs and anti-Semitism, it would be highly inappropriate to place the blame for Wagner’s subsequent extremism on Leah’s shoulders.