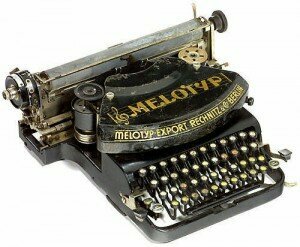 Last time, I introduced you to the Columbia Music Typewriter. And rightfully, you must have thought that it really doesn’t look anything like a conventional typewriter or a machine operated via a keyboard. And it certainly looked rather cumbersome to operate. For a machine resembling an ordinary typewriter, but one that placed music symbols on paper, you had to wait until 1937. Probably invented by Gustave Rundstatter in Frankfurt, Germany, the Melotype—which later developed and was called the Nototype in the United States—won the Grand Prize at the International Exhibition in Paris in 1937. The machine cause a sensation, because it looked like a typewriter, “except that the common keyboard is replaced by one of special design, and that the carriage, instead of advancing every time a key is touched, stays quiet until the assemblage of notes and signs is complete. The difficulty of adjusting the signs with reference to the staff is avoided by an organic connection of each note with the corresponding part of the staff. The latter is formed automatically by the junction of notes and signs on the blank paper, at each impression.” 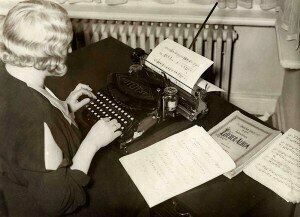 In total, only 10 machines were produced, with 5 exported to the United States. It had 44 keys and could print 88 notes or music symbols by using the shift key. The typewriter could print the staff, and notes and chords were gradually built up by printing the note and then the stem and flags, or beams. Keys were color-coded to remind users of various functions, and via a dedicated pointer, the carriage could be adjusted up and down to move the paper to the necessary position. The advertisement proudly reads, “the notes are written as easily, as quickly, and as exactly as one would play them on the keyboard of a piano. The copyist is never fatigued, and the typewritten score is quite as neat and clear as a printed sheet.” The outbreak of World War II puts an end to the Melotype, and musicians and composers had to wait for the advent of computing software and MIDI keyboard input to fully realize the possibility of this classic musical typewriter.