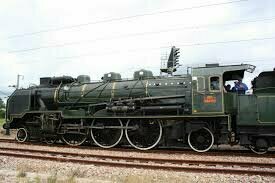 Swiss composer Arthur Honegger wrote three ‘symphonic movements,’ as he called them. The first, Pacific 231, written in 1923, brought the world of a great train to the concert stage.

We listen, almost with bated breath, as the steam train slowly builds up its power and begins to gain speed.

Honegger: Symphonic Movement No. 1: Pacific 231 (New Zealand Symphony Orchestra; Takuo Yuasa, cond.)
Although we know that Honegger was a great train enthusiast, and despite the title, Honegger always declared that this work was not about trains, but as an exercise in ‘building momentum while slowing the tempo of a piece.’

To accomplish his goal, Honegger played with note values: the feeling of acceleration is created by making the note values smaller, while at the same time slowing the tempo. As you go through the score, Honegger carefully notes the time: half-note = 60 at the start, and then we speed up to half-note = 80, then slow to quarter note = 152, closing at the end to quarter note = 12, while the music is seemingly flashing by in eighth notes.

In 1949, Jean Mitry took Honegger’s music and set it to film, with the help of the SNCF. Using a real Pacific 231 train, they shot footage that would illustrate the sounds in the music, thus turning Honegger’s whole idea inside out.

The second symphonic movement was entitled Rugby (1928). Honegger gets away from the literal depiction of a game and gives us, instead a brilliant scherzo, which at the same time, depicts a struggle between two opposing forces. A chorale-like theme in the brass at the beginning is transformed in the end as a triumphant ending for the victors (whoever they may be). 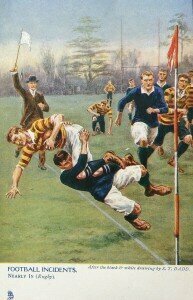 Symphonic Movement No. 2: Rugby
Rugby, a type of football game that originated at Rugby School in England, where an oval ball can be advanced to the goal only by running with it or kicking it forward. The forward throw is not permitted.

In the music, the struggle between the two opposing sides is vigorously depicted.

His last piece of symphonic movement eschewed a descriptive title, probably because Honegger found people were taking it all too literally. Symphonic Movement No. 3 was commissioned in 1933 by Wilhelm Furtwängler for the Berlin Philharmonic Orchestra. The imagery is less clear here, but the tone is strident and restless.

Symphonic Movement No. 3
At the end, however, the tone turns pensive, distancing itself from the earlier noise.

Despite this German commission, Honegger’s music was regarded as ‘degenerate’ by the National Socialist government and performances of his music were banned in the countries under their control, including Germany and France.

Although Pacific 231 remains Honegger’s most performed work, the other 2 works in this Symphonic Movement series deserve consideration as they seem to show the other sides of life: sport and, perhaps, politics.