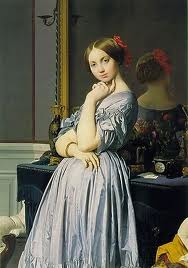 “She was beautiful, very beautiful, a Lorelei: slender, of lofty bearing, enchantingly graceful and yet dignified in her movements, her head proudly raised, with an abundance of fair tresses, which waved over her shoulders like molten gold, a regular, classic profile, which stood in strange and interesting contrast with the modern breath of dreaminess and melancholy that was spread over her countenance; these were the general features which rendered it impossible to overlook her in the salon, the concert-room, or the opera-house, and these were enhanced by the choicest toilets, the elegance of which was surpassed by few, even in the salons of the Faubourg St. Germain.

Harmonies poetiques et religieuses, S173/R14 (1847)
That fantastic dreams were hidden behind the purity of her profile, and passion, burning passion, under the soft melancholy of her expression, was known to but a few, at the time that her connection with the young artist began.” The lady in question — described by the early Liszt biographer Lina Ramann — was none other than Marie Catherine Sophie d’Agoult. Born Marie Flavigy in Frankurt am Main, she was sent to Paris at the age of sixteen. Once she had finished her education at the Sacré Coeur, and after a torrid affair with the poet Alfred de Vigny, she married the Comte Charles d’Agoult in 1827. He was fifteen years her senior, an ill-mannered and hardly functioning war veteran, and love was simply not part of the equation. They did have two children, but by and large, they conducted an open marriage. That left Marie — who described herself as six inches of snow covering twenty feet of lava — with plenty of time to enjoy the sparkling gaiety of the salon. 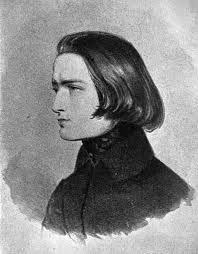 Harmonies poetiques et religieuses, S173/R14 (1847)
In early 1833, the Marquise Le Vayer invited Marie to sing in a women’s choir. The guest of honor was Franz Liszt. In her memoirs, Marie details this first encounter: “I use apparition because I can find no other word to describe the sensation aroused in me by the most extraordinary person I had ever seen. He was tall and extremely thin. His face was pale and his large sea-green eyes shone like a wave when the sunlight catches it. His expression bore the marks of suffering. He moved indecisively and seemed to glide across the room in a distraught way, like a phantom for whom the hour when it must return to the darkness is about to sound. Franz spoke with vivacity and with an originality that awoke a whole world slumbering in me. The voice of the young enchanter opened out before me a whole infinity, into which my thoughts were plunged and lost. Between us there was something at once very young and very serious, at once very profound and very serious.” Marie was six years older than the young enchanter, and by the early summer of 1833 their affair was in full bloom. Liszt visited her in Croissy, and Marie came to Paris where they secretly met in a small apartment affectionately referred to as the “rat hole.” The chemistry was unmistakable, and by May 1833 she wrote, “Sometimes I love you foolishly, and in these moments I comprehend only that I could never be so absorbing a thought for you as you are for me.”

Apparitions, S155/R11 (1834)
Liszt’s declaration of love was not far behind, and burning with desire he writes: “How ardent, how glowing on my lips is your last kiss! Marie, Marie, let me repeat that name a thousand times. It lives within me, burns me and threatens to consume me. I am not writing you; I am with you. Oh for an eternity in your arms. There is heaven and hell, and everything else, inside you, yes, inside you. Let me be wild and crazy. I am beyond help.” Concordantly, Liszt introduced himself to the public as a mature and original composer with his poetic Harmonies poétiques et religieuses and a set of three Apparitions. However, these early days of courtship did not run entirely smoothly. Some of the love letters he had written to Adèle de Laprunarède following their winter tryst in the Savoy came into Marie’s hands and sparked a violent jealous row. Although he pleaded with her to accept the letters as immature follies, Marie never really forgave him. In addition, Marie’s six-year-old daughter Louise fell ill, and within a couple of days died from massive inflammation of the brain. It is unclear whether Marie considered this tragedy a punishment for her illicit affair with Franz, but in her state of depression and despair, in which she contemplated suicide, she refused to answer his calls or his letters. After nearly six months of being unable to see Marie, Franz wrote her a letter announcing his intention of leaving France, and expressing his desire to see her one last time. Marie relented and travelled to Paris for an emotional reunion in March of 1835. Blandine, their first daughter, was born nine months later.