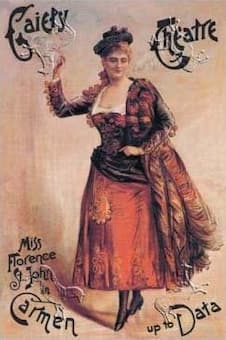 As soon as an opera hit the London stage in the mid-to-late 19th century and everyone was familiar with the tunes, it immediately became subject of humorous versions. Beethoven’s Fidelio was turned into Pizzarro the Great Tyrant or the Little Wonder (1861), Bizet’s Carmen became Cruel Carmen, or the Demented Dragoon and the Terrible Toreador (1880) and Carmen Up-to-Data (1890).

The songs in the burlesque operas came from all kinds of sources, often with the words rewritten. In the take-off of Verdi’s Il Trovatore as Ill-Treated Il Trovatore, or The Mother, the maiden, and the Musicianer (1863), music included songs such as ‘Kitty of Sligo’ (to be sung by Count Di Luna) and Azucena sings a medley that included music from the opera itself, combined with songs from other sources such as the Yellow Dwarf Polka by John Barnard, and Nix My Dolly, Pals, Fake Away by G.H. Rodwell, from the play Jack Sheppard, which in 1840 was so well-known that it was ‘deafening us in the streets.’ 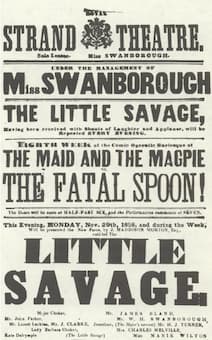 Music from other operas was also inserted into the burlesque, including music from Bellini’s La Sonnambula. La sonnambula had been parodied as early as 1835 as The Roof Scrambler.

Henry James Byron (1835-1884) started his life as a physician and then got into theatre, first as an actor then as a playwright. He found success finally through his burlesques and ‘punny plays.’ His burlesque operas include Bellini’s La sonnambula remade into La! Sonnambula! Or the Supper, the Sleeper, and the Merry Swiss Boy (1865) and Il Sonnambolo, or Lively Little Alessio (1878); Donizetti’s Lucrezia Borgia made into Lucrezia Borgia M.D., or La Grande Doctresse (1868); Donizetti’s Lucia di Lammermoor as Lucia di Lammermoor, or the Laird, the Lady, and the Lover (1865); Mozart’s Don Giovanni became Little Don Giovanni, or Leporello and the Stone Statue (1865); Rossini’s La gazza ladra was The Maid and the Magpie or the Fatal Spoon (1854); Weber’s Der Freischütz turned into Der Freischutz or the Bride, the Bullet, and the Bobby (1866) and Der Freischutz, or the Bill! the Belle! and the Bullet! (1866). 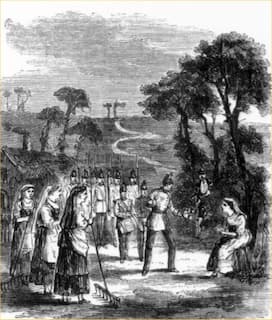 W.S. Gilbert (1836-1911), much better known for his collaborations with Arthur Sullivan and their comic operas, such H.M.S. Pinafore and The Mikado, had an earlier turn on stage with his own burlesques, including his take-off on Donizetti’s L’elisir d’amore as Dr. Dulcamara or the Little Duck and the Great Quack (1867) which was written and staged in a mere 10 days.

Programme for an 1869 production of Gilbert’s Robert the Devil

He also did a version of Donizetti’s La Fille du Régiment as La Vivandiere or True to the Corps (1868) and Bellini’s Norma as The Pretty Druidess, or the Mother, the Maid, and the Mistletoe Bough (1869) but his most successful parody took on Meyerbeer’s Robert le Diable as Robert the Devil, or the Nun, the Dun, and the Son of a Gun (1868). This ran for over 120 performances (most parodies ran for just a month) and included music by Meyerbeer, Bellini, Offenbach, and others.

The self-serious side of opera made it prime material for parody and the London stage in the 1860s onward took every advantage of making opera topics, up-to-the-minute in its references, and, above all, funny. Unfortunately, as these productions relied on music that was largely oral or traditional and in versions that would be highly illegal in today litigious world, there are no recordings of these opera burlesques. They are of a time that has passed.