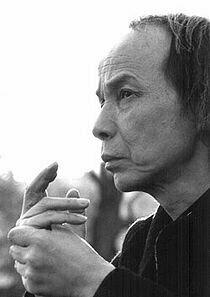 Tōru Takemitsu was a composer, but he was also a writer on aesthetics and musical theory. His music is delicate and refined, as beautiful as Hokusai print or a carved jade netsuke. Largely self-taught, his music combines elements of Japanese and Western philosophy with the subtle manipulation of instrumental and orchestral timbre, using both western and traditional Japanese instruments, and the use of defined silences to create a unique and extraordinary soundworld.

Takemitsu admired Debussy and Messiaen, as is evident in his piano music, and was drawn to composers who were themselves deeply influenced by the musical and philosophical culture of Asia, including John Cage.

Takemitsu composed his Rain Tree Sketch II in 1992 in memory of Olivier Messiaen (1908-1992), the French composer who had a strong influence on Takemitsu. The work was composed for a concert “Hommage à Olivier Messiaen” at Les Semaines Musicales Internationales d’Orléans, France, and was premiered by Alain Neveux on 24 October 1992. The name of the work was probably inspired by a quotation from a novel by Kenzaburō Ōe about the miraculous rain tree, whose tiny leaves store up moisture and continue to let fall raindrops long after the rain has ceased. The work is also a dreamy meditation on the flow of life, and was the last piano piece by Takemitsu (his first Rain Tree Sketch was written in 1982). It is in a clear ternary (ABA) form, with a rhythmic opening which is reprised, in shortened form, after the melodic middle section. Its tonal language is redolent of Debussy and Messiaen, with chords used for colour and timbre rather than strict harmonic progressions, and, like its dedicatee, Takemitsu employs recurring motifs (such as an ascending three-note broken chord figure) and well-placed silences to create a carefully nuanced atmosphere and colouristic shadings. Directions such as “celestially light” and “joyful” contribute to the metaphysical nature of this work.

Much of the power and profundity of this work comes not from the notes themselves, but the silences between them, which create extraordinary moments of stillness and repose. This arresting juxtaposition between sound and silence reveals Takemitsu’s intense interest in the Japanese concept of “Ma” – which translates as a pause in time, an interval or emptiness in space. The best performances of Rain Tree Sketch II are by those performers who appreciate the music’s need for stasis rather than forward flow. (The powerful use of silence is also evident in Oliver Knussen’s homage to Takemitsu, ‘Prayer Bell Sketch’.)

Oliver Knussen: Prayer Bell Sketch Op. 29
There are suggestions of traditional Japanese instruments in this work (and other piano works by Takemitsu): specifically the Taiko drum (the low D pedal point at the opening of page 2), the long zither koto and the short-necked lute biwa (the ascending arpeggio figure suggests the plucked sound of these instruments). This music requires a particularly sensitive approach: the sounds should be played with absolute clarity, and must also have great beauty, but not too much sentiment. Motifs and forms unfold like a “picture scroll unrolled.” (Tōru Takemitsu), emerging out of silence and retreating back into stillness.

“….sound, in its ultimate expressiveness, being constantly refined, approaches the nothingness of that wind in the bamboo grove.”