‘I Have Listened And Followed My Heart’ 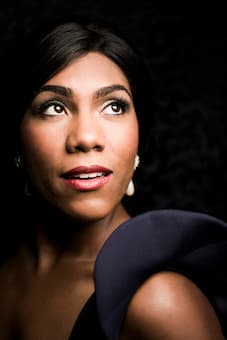 I chat to American mezzo-soprano J’Nai Bridges just as she is about to travel to Amsterdam to perform excerpts from Donizetti’s Tudor Trilogy with the Dutch National Opera (after a suitable quarantine, of course). J’Nai has sung at opera houses including The Metropolitan Opera, LA Opera and Opernhaus Zürich, and gave a sold-out Carnegie Hall debut in 2018. The pandemic sadly saw cancellations of performances with the Met, Dutch National Opera, and Festival d’Aix-en-Provence, but during the last year, amongst other collaborations, J’Nai interviewed legendary soprano Reri Grist, and led a panel discussion in collaboration with Los Angeles Opera on race and inequality in opera. ‘I’m grateful for the time I’ve had with myself,’ she says. ‘I feel like I have a whole new set of skills!’

Raring to get back to performing, I catch up with J’Nai about her journey into the world of opera and her inspirations past and present. 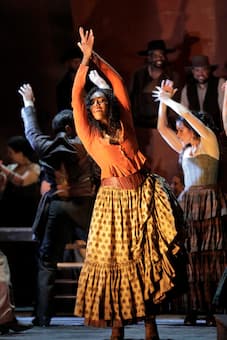 Long story short, I was an athlete, I was a basketball player. I had scholarships to go and play basketball in college, and it was my senior year in high school where, in order to graduate, I had to fulfil an arts elective. I decided to join the choir – I always loved to sing, I grew up singing in the church and also playing piano. Music was always in me, but never classical voice, so I decided, “I’ll join the choir, why not?” When I joined my teacher immediately noticed a natural gift and so she suggested that I start to study privately. I said, “Well, I’m crazy busy, but what the heck,” and [when I] began to study privately I just fell in love.

I’ll never forget my teacher playing clips of Carmen for me. I just thought, “Wow, this is amazing, I need to know more, I need to see an opera live,” and I was bit from there.

I auditioned last minute for many conservatories, and got into all of them! I ended up going to the Manhattan School of Music because I’d always loved New York. Little to my knowledge, I feel like I was being set up to go to New York and pursue this newfound love.

I came to New York having very little knowledge about opera and classical voice, but I was just so ready to receive and see where it would take me. I don’t think most parents would support their children like this – it seemed so random – but I had the full support of my parents. My voice was developing so quickly when I was studying in high school and they saw how much I loved it.

It was nothing that was ever planned. I just went to New York to see what would happen. My voice developed and took a liking to the style, and I ended up graduating with the highest honours and being accepted into the Curtis Institute of Music in Philadelphia for grad school. The percentage of people who are accepted into Curtis is so low, so that was confirmation for me that this was something I really had a shot at. I feel like opera and classical music have chosen me, and I have listened and followed my heart. 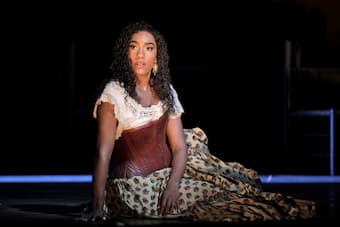 There are so many. It might sound cliché but I’ve been obsessed with Beyoncé since I was a little girl. I remember watching her and Michael Jackson – they seem to have this work ethic and this aim to perfectionism that I remember admiring their every step as a little girl, every move, how it seemed so intentional and calculated, yet the heart was always very present.

I grew up with Maya Angelou’s poetry, and it really has guided my life in so many ways. It’s given me the confidence, as a black woman in this world, to navigate it as gracefully as possible. I adore Michelle Obama. I love Coldplay. I admire any band who has been around and so relevant for so long, and to see their journey. They seem to continue to reinvent themselves, and I love that so much.

There are opera singers I greatly admire as well. I had the opportunity to interview Reri Grist recently, and to hear her story and her love for music, and how it is still so present, is really inspiring.

I just love it all, and I feel comfortable singing most music. I don’t feel super comfortable singing Rossini, that’s one thing that I’ve learned, but I would say this music that I’m learning now, the Donizetti, fits my voice like a glove. It’s challenging me to really level up. It’s exposing many strengths of mine but also some weaknesses that I have been glossing over. It’s easy to do that with certain repertoire – not ‘fake it’, but just not pay attention.

I really love bel canto, the Donizetti, the Bellini, and I also love singing German repertoire, German lied – Brahms, Mahler, Strauss. And English: it’s my native tongue, I grew up in the church, I loved singing American music, in particular gospel, spirituals, art song, musical theatre even. I think because it’s my native tongue I can express it in a way that’s very authentic.

Purcell: When I am Laid in Earth 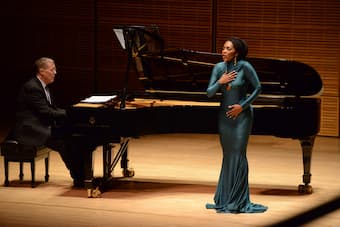 Is there a particular composer / piece that you’ve really felt your relationship will change with over time (for better or worse)?

Definitely. Carmen is one of those roles – I’ve been singing it for over ten years. It started in grad school when we sang La Tragédie de Carmen (which was the abridged Peter Brook version of it). It was a stretch then but I knew it was going to be in my repertoire.

I would present the Seguidilla and Habañera for competitions, I would sing scenes at different summer programmes, so it was a very strategic process of slowly adding. It’s a big sing – she sings nearly all the time, and is running around the stage. 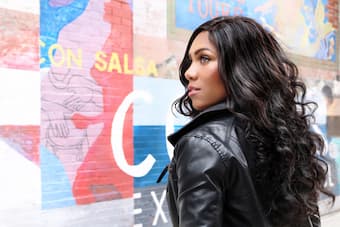 That’s been a role that I’ve really seen develop in me vocally and emotionally. I play her very differently than I did in college, because I’ve experienced life, and I’ve realised, for me, Carmen is a character that actually doesn’t have to run around the stage and do a whole bunch. People are drawn to her, and that’s just come with maturity.

I love movement, I love going to the ballet – I’ve been really inspired by it recently. I think, because of Misty Copeland, I didn’t really feel a connection to it before. I felt like it was this art form that I never saw any black girls on stage [in], so it wasn’t something I could really get into. After she came out my whole world was opened and I feel like watching ballet is so beautiful. I’ve tried to relate, to put myself into that world, because I am an athlete and movement is so integral to producing sound. I’ve taken some ballet classes and it’s really informed my singing for the better.