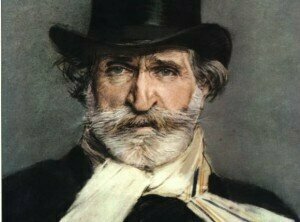 One of the most endearing myths in Classical Music states that Giuseppe Verdi wrote his opera Aida in celebration for the opening of the Suez Canal in 1869. It is a great headline, but it’s not even remotely true. To be fair, Verdi was invited to compose an inaugural hymn for that occasion, but he declined. However, Verdi was commissioned to write an opera in celebration of the opening of the Khedivial Opera House in Cairo. 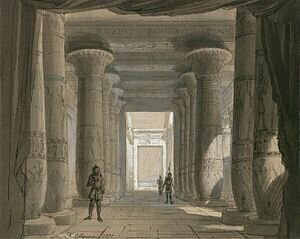 Set design by Philippe Chaperon for Act 1 of Aida, year 1871

As it happened, Aida could not be performed for the opening of the Opera House, as the Franco-Prussian War was raging in Paris making it impossible for the scenery and costumes to be shipped. So the Khedivial Opera in Cairo officially opened with Verdi’s Rigoletto. Aida finally premiered on 24 December 1871, and invited dignitaries, politicians and critics were overjoyed, however, Verdi was not. Verdi had not been part of the Cairo premiere and he was furious to learn that the general public had not been allowed to attend the performance. As such, Verdi considered the performance at La Scala in Milan on 8 February 1872 to be the real premiere. 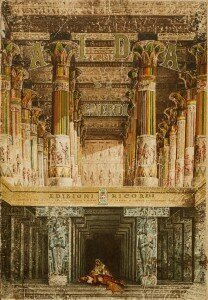 The road to Egypt had not been an easy one for Verdi. Throughout the 1860s he had struggled to find suitable librettos. Thankfully, the French librettist and impresario Camille Du Locle, with whom he had previously collaborated, came up with a scenario by the archaeologist and Egyptologist Auguste Mariette, based on an invented story set in Egyptian antiquity. And we all know the epic tale of love, loyalty and betrayal, which chronicles the love triangle between the captive Nubian princess Aida, the Egyptian princess Amneris, and Radames the soldier they both love. As a critic wrote at the time of the premiere, “Aida and Radames’ love for one another becomes a shining example of true devotion that ultimately transcends the vast cultural differences between their warring nations, heralding a time of unprecedented peace and prosperity.” More than a century later that messages seems to be acutely relevant!