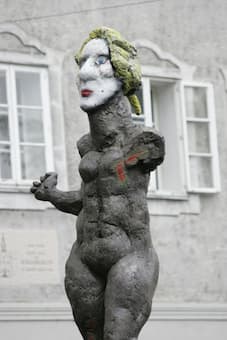 The city of Salzburg rose from a small Celtic settlement into a powerful economic center because of its trade in salt. The city regulated the collection of tolls and taxes from barges ferrying salt from the northern part of the Alps to Italy. Today, we know Salzburg as the birthplace of Wolfgang Amadeus Mozart, and the famed composer has become a marketing cliché, selling everything from alcohol to chocolates and beyond. Recently, however, the city has started to probe more deeply into its relationship with its most famous son. Sponsoring a series of public arts projects, the city has commissioned artists from throughout the entire spectrum, including the German painter and sculptor Markus Lüpertz. Lüpertz has frequently been at the center of public controversy, as he insists “on capturing the object of representation with an archetypal statement of his existence.” And truth be told, his personal homage to Mozart is no exception. His colored bronze figure of Mozart is standing on a stone plinth, and presents an unclothed female torso. A bust of the composer with the characteristic braid is placed on top of the torso. According to the artist, “he sees Mozart as a conscious contradiction between male and female, strong and delicate, between assembly and disassembly, completion and fragment.” In that sense, his homage to Mozart reaches far beyond a mere figurative representation and represents the ambiguity of genius. 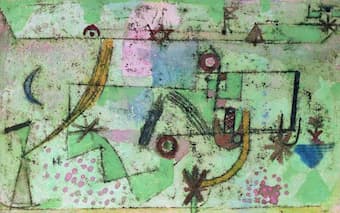 Paul Klee: In the Style of Bach

In his paintings, the Swiss-German artist Paul Klee (1879-1940) explored radical and modernist experimentations. However, his taste in music was decidedly much more conservative. He hated the contemporary works of Schoenberg, Berg and Webern, and severely disliked the compositions of Wagner, Bruckner and Mahler. Klee was an exceptionally gifted musician, but he decided to focus on the visual arts because “the idea of going in for music creatively was not particularly attractive in view of the decline in the history of musical achievement.” For Klee, modern music lacked meaning, and he believed that the ultimate greatness of Bach and Mozart could never be reproduced in the musical medium.” As such, he envisioned an art of the future that translated the musical accomplishments of Bach and Mozart into visual terms. He became intensely preoccupied with the parallels between music and painting. His visual connection to the structural articulations found in music focused on polyphony and counterpoint. In his 1919 composition “In the Style of Bach” this connection becomes explicit. The symbols and plants are arranged to recall musical notation and the whole work has decided linear and contrapuntal similarities with a Bach score.

The German-American poet, novelist, and short story writer Charles Bukowski (1920-1994) used his poetry and prose to depict the “depravity of urban life in American society.” Relying on experience, emotion, and imagination he used direct language to describe violent and sexual imagery and behavior. While some critics found his style offensive, Bukowski engendered a cult following, which made him of great interest to the FBI. In the midst of urban depravity, Bukoski still managed to find musical “Friends within the Darkness.”

I can remember starving in a
small room in a strange city
shades pulled down, listening to
classical music
I was young I was so young it hurt like a knife
inside
because there was no alternative except to hide as long
as possible–
not in self-pity but with dismay at my limited chance:
trying to connect.

the old composers — Mozart, Bach, Beethoven,
Brahms were the only ones who spoke to me and
they were dead.

finally, starved and beaten, I had to go into
the streets to be interviewed for low-paying and
monotonous
jobs
by strange men behind desks

men without eyes men without faces
who would take away my hours
break them
piss on them.

now I work for the editors the readers the
critics

but still hang around and drink with
Mozart, Bach, Brahms and the
Bee
some buddies
some men
sometimes all we need to be able to continue alone
are the dead
rattling the walls
that close us in. 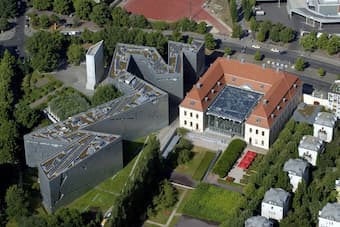 With his design “Between the Lines,” architect Daniel Libeskind won the 1989 competition to build the “Jewish Museum,” an extension of the Berlin Museum. This freestanding building is based on a floor plan featuring two lines; a visible zigzagging line and an invisible straight line. Where these two lines intersect are empty spaces that cut through the building from the basement to the roof. It is a topological deformation of the six-pointed Star of David, but “transformed from a neutral symbol of religious faith into the memory of the holocaust through the alteration of the traditional geometry. This star, disjointed and no longer recognizable, becomes the path through the museum.” 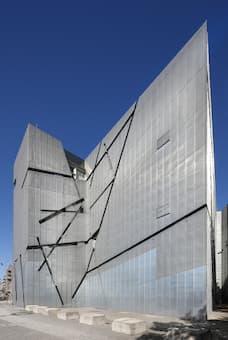 Libeskind mentions different sources of inspiration for his design. For one, he plotted the addresses of prominent Jewish and non-Jewish Berliners on a map, drawing the connections between Jewish tradition and German culture prior to the Shoah. From this network of lines Libeskind developed the structure of the building and the windows. Inspiration also came from Arnold Schoenberg’s unfinished opera Moses and Aaron. The opera terminates at the point where Moses and Aaron are unable to complete their mission with the people of Israel, and Moses laments his inability to lead the people to the Promised Land. The building’s central void echoes Moses’ lament, “Oh word, thou word that I lack,” while the zigzag shows Aaron’s determination to go forward, nevertheless. “The architectural space becomes a declared reference to the dodecaphonic music presented in its final expression of an ineluctable reduction to silence.”