Blog
A Little Nibble of Mozart and Something More
by Maureen Buja February 22nd, 2014
Tags: Mozart 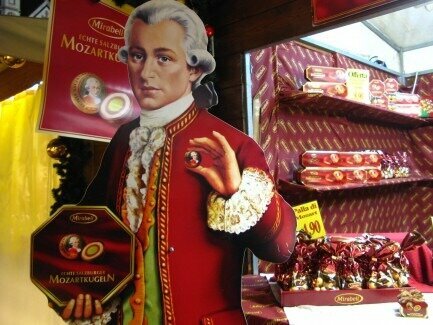 When you’re in Austria, you’re assaulted by images of Mozart – not Mozart the Composer but Mozart the Chocolate. The Mirabell Chocolate Factory in Salzburg is the creator of the famous Mozartkugel. It’s a little ball of milk chocolate, filled with praline cream and with a centre of green marzipan, in a distinctive red and gold wrapper with a portrait of Mozart on it. If you’d prefer something different, with a bit more marzipan, there’s the Mozarttaler, otherwise known as the Mozart Medallion. And then, the largest form is the Mozarttafel, or Mozart Chocolate Bar.

We think that there must be other composer sweets out there in the world, but we’ve been unable to find them and so must rely on our imagination to see what else might be created: 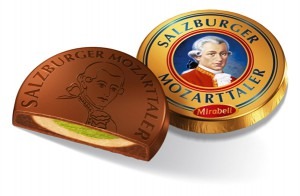 The Verdi Violette – named for the heroine of La Traviata. We imagine a candied violet on a thin wafer of dark chocolate. Very delicate, very fragile, and very beautiful, only to be consumed when the camellia blooms.

Strauss Sticks – the Johann Strauss family of conductors and composers was the inspiration for this striped candy stick that can either be slowly eaten or used to lead an orchestra.

The Perfect Wagnerite – a delicate chocolate ring, forged deep in the trackless wastes by the Niebelung. Comes only in a gold wrapper.

Freia’s Apple Fritters – for the immortal in your life, courtesy Wotan’s daughter in Das Rheingold. 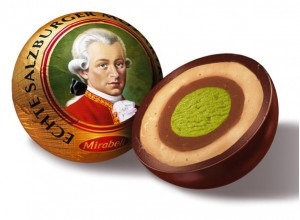 The Queen of Night – Very dark chocolate, with a sparkly surprise inside. Will later turn out to be nothing like you originally thought it was.

The Monteverdi – a sweet that resembles a green mountain, made of tinted coconut flakes and condensed milk, browned in the oven.

Beethoven Bonbons – a delicious concoction that leaves you singing Odes to Joy. Dark chocolate surrounds a meltingly soft truffle centre, with a hint of mint in the background.

The Grand Canyon Sweet – Ferde Grofé—inspired goodness that begins with a refreshing mint eye-opener and ends with a raspberry-flavoured sunset. 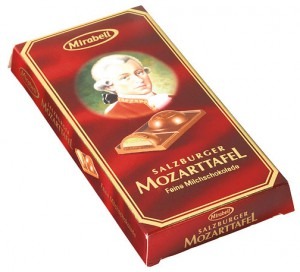 Gershwin Goodies – a nip of the Jazz Age, with a liquor center.

Crumb-lies – a crunchy honeycomb that’s perfect for those days when you’re afflicted with Dark Angels.

Birtwhistlers – a candy with a double hole in the middle that, when held between the teeth, will whistle.

The Invisible Interlude – a clear strip that melts on the tongue, with the classic flavours of mint and chocolate magically infused to clear your mind, give you a fresh viewpoint on the world, and leave you wanting more.