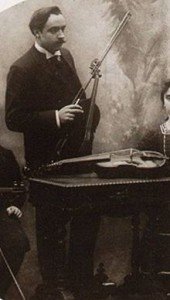 The surname Casadesus identifies a prominent French artistic family. An integral part of the international classical music landscape, the Casadesus family remained artistically active for well over a century. Arguably, the most prominent member of the family was pianist Robert Casadesus, who famously collaborated with Maurice Ravel. During the war, Robert moved to Princeton, New Jersey, and became a neighbor of Albert Einstein. In a previous article I have already told you the story of how Albert and Robert performed Mozart violin sonatas on a number of private occasions; it must have been quite a sight! Robert Casadesus was the nephew of Marius Casadesus, who we met in a previous article on the supposed “Adélaïde Concerto” by the 10-year old Wolfie Mozart. But today, I want to tell you about Henri Casadesus, uncle of Robert and brother of Marius. 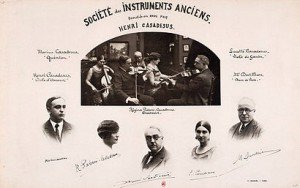 A Family Tradition of Musical Imagination
Henri Gustave Casadesus (1879-1947) was a gifted violist who had a keen interest in the music of earlier periods. Together with Camille Saint-Saëns, he founded the Society of Ancient Instruments in 1901, and as “musical ambassadors” the ensemble extensively traveled abroad. The society performed between 1901 and 1939 on Baroque period instruments, and over time, Henri assembled a remarkable collection of rare and ancient instruments. His instrument collection can still be admired in the Museum of the Boston Symphony. The principal aim of the Society was to present and perform unknown musical masterworks by famous masters. And since unknown musical masterworks are rather difficult to come by, Henri—just like his brother Marius—decided to entertain audiences with homegrown compositions falsely attributed to the great masters. Most famously, there is a concerto ascribed to Carl Philipp Emanuel Bach. It first appeared in a Russian edition, and was subsequently performed by Darius Milhaud and Serge Koussevitsky, and recorded by Felix Prohaska and Eugene Ormandy. Scholar Rachel Ward wrote, “At the present time, the most frequently recorded concerto of C.P.E. Bach is a spurious one.” Henri is also credited with a “Handel and Johann Christian Bach Concerto,” both for viola and orchestra. As far as we know, Henri Casadesus composed these works, a charge he never denied.
Henri Casadesus: “Johann Christian Bach” Concerto for viola and orchestra