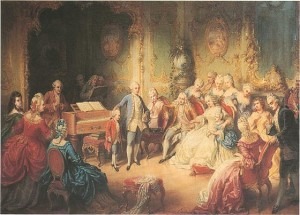 It was advertised as the musical discovery of the century! In 1933, the Hungarian violinist Jelly d’Aranyi stepped onto the London stage and performed a preciously unknown violin concerto by Wolfgang Amadeus Mozart. That concerto had been published in 1933 in an edition by the French violinist Marius Casadesus, known for having given the premiere performance of Ravel’s Tzigane in the presence of the composer. The work was called the “Adélaïde” Concerto by Casadesus, claiming the short score he worked from consisted of an autograph in two staves—the upper carrying the solo part, including tuttis, in D, the lower the Bass in E—with a dedication accompanying the score addressed to Madame Adélaïde de France, the eldest daughter of Louis XV, and dated Versailles May 26, 1766.Wolfie Mozart did have a particularly close relationship with the violin during his early years, and he appeared on a number of occasions as a soloist outside Salzburg, including Paris. The “Adélaïde Concerto” was addition proof of the extraordinary musical genius of the ten-year-old boy!

Things started to get somewhat mysterious when Mozart scholar Alfred Einstein started to dig into the background of the concerto. For one, he was not allowed to see the autograph score, and he questioned why Leopold had not included it in the catalogue of his son’s works. In addition, the Mozarts had actually arrived in Versailles on May 28, 2 days after the supposed dedication and it was unclear why Mozart would write out a dedication to an unfinished work. Einstein believed that the musical style “projected backward from the later concertos,” and he eventually came to the conclusion “to put it mildly, the concerto is a piece of mystification a la Kreisler.” But the musical world really wanted to believe in a new Mozart concerto and Friedrich Blume, one of the editors of the old Mozart edition suggested, “as long as the source remains inaccessible it is surely better to work on the hypothesis that the manuscript and dedication have nothing to do with one another than reject the work altogether.”

And thus, the “Adélaïde” Concerto” was officially accepted in the standard catalog of Mozart’s works and assigned the appendix number K. 294a. Yehudi Menuhin made a successful recording of the concerto and it took litigation concerning royalties over the orchestration that eventually forced Casadesus to admit in 1977 that he was the actual composer of the Adélaïde Concerto. The work is still performed and marketed under Mozart’s name, but it has entirely disappeared from the New Mozart Edition!