Ravel and his parents

Maurice Ravel was born on 7 March 1875 in the Basque town Ciboure, Basses-Pyrénées located in France, situated close to the Spanish border near Biarritz. It was the village where his Basque mother, Marie Ravel, née Delouart, was born and had grown up. 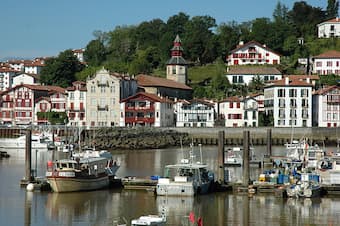 Her father had been a sailor and fisherman, as had been his father and grandfather before him. The Delouart family had relatives living in Spain, and Marie was sent for visits. While at Aranjuez, in the Castilian desert region of northern Spain, she met Pierre Joseph Ravel, a mining engineer from Switzerland who was working on the construction of a new Spanish railroad. His family originally hailed from a little village near Annecy in the Haute-Savoie. His father subsequently moved to Versoix, a small town not far from Geneva and adopted Swiss nationality. The name Ravel was originally perhaps spelled as Ravex, Ravet, or Ravez, and Maurice’s grandfather became a baker or manufacturer of porcelain. He married the Swiss girl Caroline Grosfort, and they had five children. In turn, Pierre Joseph Ravel and Marie Delouart were married in 1874. 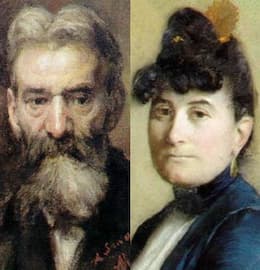 Pierre Joseph Ravel had wanted to be a concert pianist, and at the age of 16 he attended the Conservatory in Geneva for several years. Apparently, he did win a prize for his performances, but an equal interest in engineering led him on this more stable career path. “Throughout my childhood,” Maurice Ravel once said, “I was sensitive to music. My father, much better educated in this art than most amateurs are, knew how to develop my taste and to stimulate my enthusiasm at an early age.” Maurice was baptized in the Ciboure parish church six days after he was born, and the family moved to Paris three months later. Maurice was deeply devoted to his mother, and his earliest memories involve her singing folk songs to him. Maurice did not receive any formal schooling at an early age, but as has been suggested, “he may have been chiefly educated by his father.” The family’s small apartment in Paris housed a piano, and it was quickly discovered that young Maurice showed great aptitude for music. 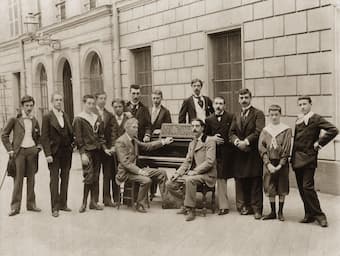 Class of Charles-Wilfrid Bériot, 1895 (Ravel on the left)

Maurice was sent for formal lessons with his first piano teacher, Henri Ghys. In his diary Ghys wrote on 31 May 1882, “I am today starting a little pupil, Maurice Ravel, who seems to me intelligent.” Soon Maurice had advanced far enough to play duets with his father. Five years later he began studying harmony with the Delibes student Charles-René, and he produced his earliest attempts at composition. 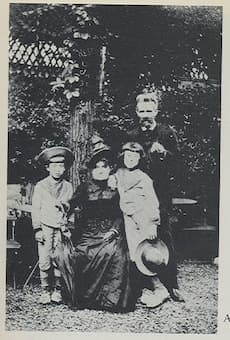 When he brought his teacher some Variations on a Chorale by Schumann, and a movement of a sonata, his teacher later recalled, “Really interesting efforts, which already showed aspiration towards that refined, elevated, and ultra-polished art which today is his noble and constant preoccupation. There has been a real unity in his artistic development; his conception of music is natural to him and not, as in the case of so many others, the result of effort.” When Ravel had reached the age of 14, both Henri Ghys and Charles-René felt that he was sufficiently well prepared to fulfill the entrance requirements at the Conservatoire National de Musique. With coaching from Émile Decombes, Ravel performed music by Chopin in November 1889 and was admitted to the preparatory piano class run by Eugène Anthiome. 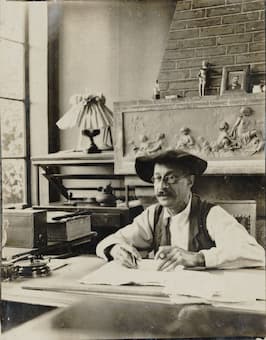 Ravel won first prize in the 1891 piano competition and progressed to Charles-Wilfrid Bériot’s piano class and Emile Pessard’s harmony class. He made solid but unspectacular progress, with particular encouragement from Bériot but in the words of an eminent musicologist he “was only teachable on his own terms.” Ravel failed to win any prizes and was dismissed from his classes, leaving the Conservatoire in 1895. “Ravel was never so assiduous a student of the piano as his colleagues such as Viñes and Cortot were, and it was plain that as a pianist he would never match them.” 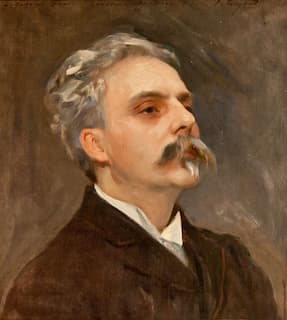 It has been suggested that he decided at that particular time to devote himself to composition. Scholars believe that these years were a time of considerable advance in his development as a composer, “a period of immense growth from adolescence to maturity.” With a stack of compositions under his arm, Ravel was readmitted to the Conservatoire in 1897 to study composition with Gabriel Fauré, and taking private lessons in counterpoint with André Gedalge. Both teachers regarded him highly, and Fauré reported “a distinct gain in maturity … engaging wealth of imagination.”