Blog
Funniest Shows in Classical Music
“All the Right Notes, Not Necessarily in the Right Order”
by Hermione Lai January 23rd, 2023

Don’t laugh, but my favorite quote on music is spoken by Albus Dumbledore, the Headmaster of Hogwarts School of Witchcraft and Wizardry in the Harry Potter series. Listening to the school orchestra he says, “Ah, Music… a magic beyond all we do here!” Many people have written on the magic and power of music, but there are only two things they consistently agree upon. For one, music cannot be translated into the language of words, and secondly, the musical universe belongs to everyone, regardless of race, creed, age, or status in life. 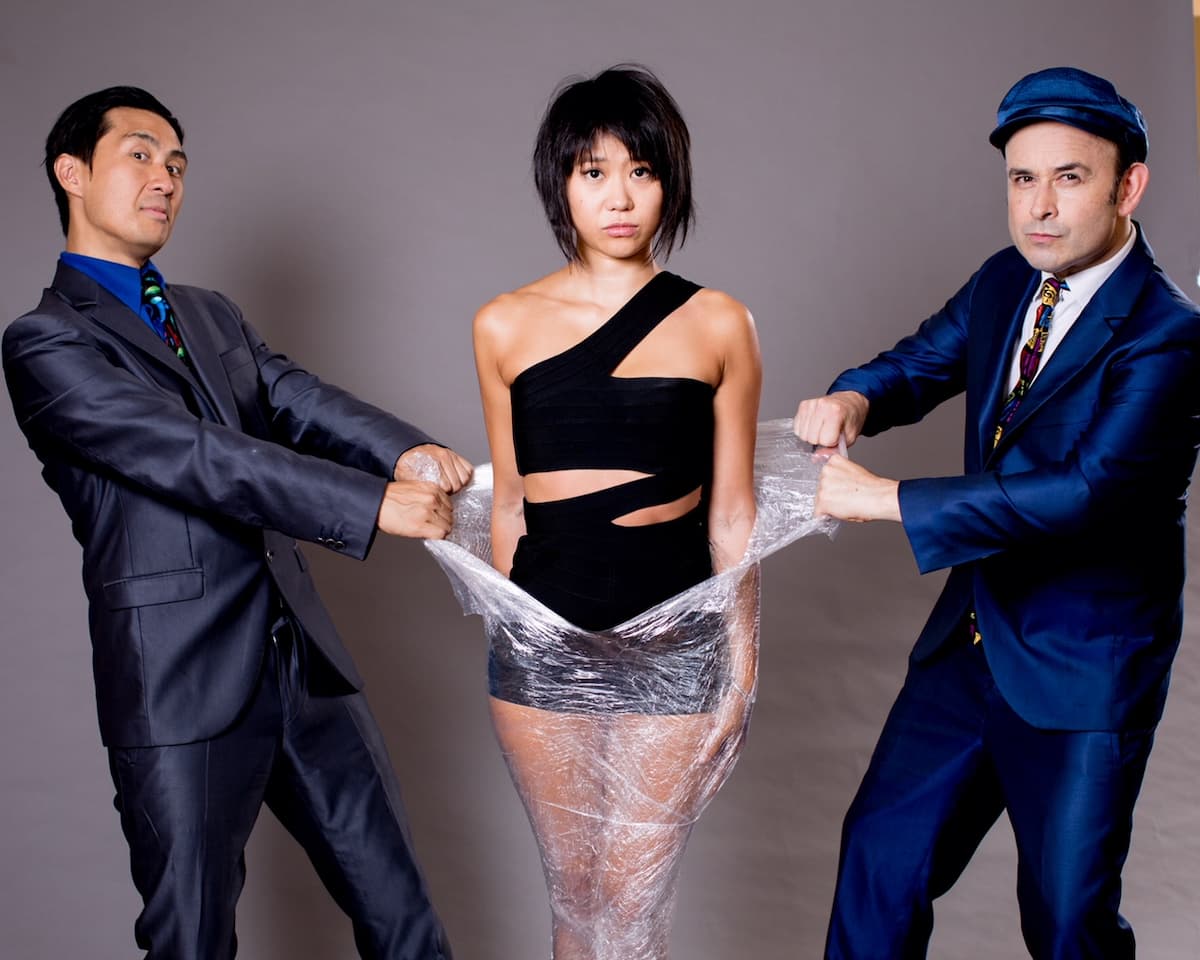 The ultimate meaning of music, some people say, lies in the sounds themselves and in the ears of the listener, which means it is for the most part highly subjective. When it comes to humor in music, it has to be funny for musical reasons, as music can’t make jokes about anything except itself. Western Classical music and its conventions have a reputation for being very serious, but I want to introduce you to a couple of highly talented musicians who turn such clichés into pure and unadulterated fun.

Let’s get started with the pairing of Igudesman & Joo, alongside special guest Emanuel Ax. The story line is simple; Violinist Igudesman has hired Ax instead of Joo for a performance of Beethoven’s “Spring Sonata,” but somehow had forgotten to tell him.

Aleksey Igudesman and Hyung-ki Joo met at the age of twelve at the Yehudi Menuhin School in England, “and became friends over a portion of fish and chips.” Igudesman hails from Leningrad, and he has never won any competitions, “mainly because he has never entered any.” During his studies at the Yehudi Menuhin School, he read the entire plays of Shaw, Wilde, and Chekhov, which didn’t improve his violin playing, but made him feel foolishly somewhat superior to other less intellectually endowed, yet harder practicing, colleagues. He is a violinist, composer, conductor, comedian, filmmaker, actor, writer, poet, and entrepreneur, “but his secret passion is cooking, eating out in luxurious restaurants, and writing reviews on TripAdvisor.” Joo started piano lessons at the age of eight and won a place at the Yehudi Menuhin School two years later. “There, he discovered that he was among geniuses and child prodigies and was convinced he would be kicked out of school.” Inspired by Victor Borge and Dudley Moore, they decided to combine classical music with comedy and popular culture to sidesplitting effects.

Superstar classical performers such as Emanuel Ax, Janine Jansen, Gidon Kremer, Mischa Maisky, Viktoria Mullova, and recently the incredible superstar pianist Yuja Wang have joined Igudesman & Joo. However, they are not just simply presenting music at the highest level, but also performing at a moment in culture, in which an increased desire to confront stereotypes is meeting an increased sensitivity about racial characterizations. Some commentators wrote, “their concert with Ms. Wang was riddled with jokes about her sexual appeal and Chinese heritage that ranged from unpleasant to highly offensive.” To all three performers, the show’s jokes were intentional, “and meant to satirize issues of race and sex in the music industry. Our goal is not to offend but to show the offenses for what they are.” And Yuja Wang added, “The amount of vile, sexist, anonymous (or sometimes not, when it’s in print) comments publicly directed at me and so many others are astonishing. So, I have decided to take control of my own narrative, and have some fun while doing it.”

The music industry, just like the world of athletics, is full of intense competition. Both disciplines require thousands of hours of preparation for competitive performances that may last just a few minutes, or in the case of some athletic events, just a few seconds. However, there is a fundamental difference because athletes love competitions, and musicians hate them. Béla Bartók once famously said, “competitions are for horses, not for artists.” And there is one more fundamental difference. Most athletic events are based on objective measurements, “but in music, all sorts of qualities are being judged, qualities like beauty, sweetness, and loveliness. How can you call somebody who plays beautifully a loser?” Probably one of the most popular and enduring myths in classical music is the idea that an artist takes the stage as an unknown, and leaves it as a star. By now, the chamber music quartet from Hamburg named “Salut Salon” is already a star ensemble, and Vivaldi’s “Summer” from the Four Seasons becomes the acrobatic stage for an intensely funny musical competition.

The funniest jokes work by setting up expectations and then doing something shocking, surprising, unexpected, or even absurd. Leonard Bernstein loved to tell this joke to make his point. An elephant is making fun of a mouse because the mouse was so tiny. So the elephant said, “Huh, look at you, you little shrimp, you peanut, you’re not even as big as my left toenail!” And the mouse said, “Well listen, I’ve been sick.” It is funny because the answer is so unexpected and shocking. You get the same effect when “2CELLOS,” the pairing of two classically trained cellists Luka Šulić and Stjepan Hauser, step onto the stage in historical costume and begin to play for a Baroque audience. Very soon, however, the world of Baroque music is left far behind, and the audience starts to realize that the song is anything but classical. The song turns out to be “Thunderstruck,” the lead single from the 1990 album “The Razoers Edge” by Australian hard rock band AC/DC. The cellists explain, “We love AC/DC as much as Bach, as both are simple and very convincing in what they do.”

We can’t present a blog of humor in and around music without referencing Victor Borge, one of the “funniest performers in classical music ever.” For many decades, Borge combined a blend of comedy and virtuosic pianism with musical satire and verbal spoofs. Born in Copenhagen, Borge arrived penniless in the United States and within a few short years, he became known as a comic actor, composer, pianist, writer, and a director of movies, stage shows, and radio programs. Unbelievably, he appeared in 848 consecutive performances at the Golden Theatre on New York’s Broadway. Humor aside, Borge was a formidable pianist, and his playing was described as “warm, rich, and highly nuanced, achieve through pedal mixtures and the formation of his large, spatula hands with cushions on each fingertip.” His collaboration with Marilyn Mulvey is pure magic, as it takes a humorous look at many operatic and musical stereotypes.

Brett Yang and Eddy Chen are better known collectively as the duo “TwoSet Violin.” They met each other as young teens in a math group, then as the youngest members of a youth orchestra, and later as students at the Queensland Conservatorium Griffith University in Brisbane. Initially, both followed conventional paths and played in the Sydney Symphony Orchestra and the Queensland Symphony Orchestra respectively. In 2016, they resigned from their orchestra jobs and began to host live classical comedy performances. Actually, it started when they posted clips of pop music played on the violin on a dedicated YouTube channel. By 2018, their channel had 100K subscribers, and by 2019 they surpassed 1 million. That number had grown to 3 million in 2021 and currently resides at over 7.5 million subscribers. It’s all about humor and relatable imperfections, and they have even started a clothing line called “TwoSet Apparel.”

Earlier in this blog, if you remember, I said that humor in music has to be funny for musical reasons. And I believe that’s the basic idea behind performances by British conductor, actor, writer, and comedian Rainer Hersch. With shows entitled “All the right notes, not necessarily in the right order,” he has featured in comedy clubs all across Europe and in TV shows around the world. One of his most exciting musical adventures features him as a conductor of his own nine-piece orchestra, and he “connects and corrupts some of the great works of classical music.” As a critic writes, “Whether you are a professor of piano or couldn’t tell a string quartet from a string vest, this is the funniest concert you will ever see.” Hersch also likes to corrupt some of the premier orchestras in the world with his arrangements, as he readily demonstrates in the featured excerpts with the Philharmonia Orchestra. Plenty of humor and excitement on offer in the world of classical music, and I am sure we will see much more of this in the coming years.