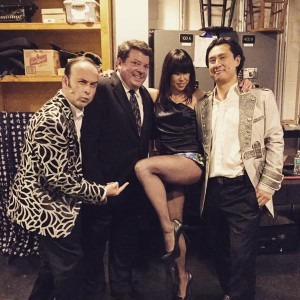 Classical music and comedy might seem a weird juxtaposition, but there have always been classical music jokesters even in Haydn’s day. His Symphony No. 45 the Farewell instructs the musicians to blow out their candles, which lit their music, and unobtrusively leave the stage one by one until only two violins are left. Haydn creatively was letting his patron, Prince Esterházy, know that the musicians needed their summer break.

Danny Kaye and Viktor Borge were hugely popular comedians who attempted to make classical music accessible to a wide and diverse audience.

Today violinist Aleksey Igudesman and Hyung-ki Joo have taken on that role. They recently appeared with the Minnesota Orchestra. 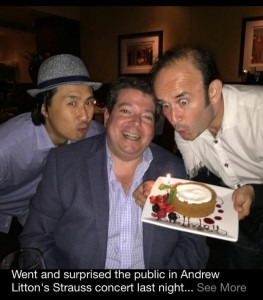 We knew we were in for an unusual evening when the assistant conductor, Sarah Hicks, a ravishing dark-haired young woman, entered wearing sparkling silvery slacks with a sexy body fitting black bodice, cut out at the shoulders and in the back. Joo sauntered in followed by a shuffling Igudesman. “Ladies and gentleman, and now Mozart,” he announced as he readied to play his violin. Joo would have none of it. Red stage lights flashed. He pounded the piano insistently. He wanted to play James Bond. An argument ensued— Mozart/Bond/Mozart/Bond they screamed…The orchestra, as if changing stations on the radio, played some Mozart then music from Bond films, back and forth, switching like Jekyll and Hide until Joo finally lay on the floor kicking and screaming. 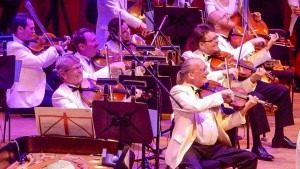 violas get into the act
Credit: Minnesota Orchestra

“Ladies and gentleman, and now Mozart,” said Igudesman. As if winning the argument he began to play Mozart’s Sonata in A minor, Alla Turka. Joo yawned audibly and once again interrupted. “This is Minnesota. The energy is different. The Feng shui is A major. Come on. Let’s play in A major.” They begin again. Joo jumped to his feet. “It’s too American! It needs to sound Turkish, Arabian, Jewish, Asian…Your B’s are to high. They have to be lower. “You are an idiot,” said Igudesman launching into an infectious Oriental modal reconstruction of Mozart’s work with a matching accompaniment in the orchestra. Igudesman maintained his fantastic violin playing despite the 2-2-3 rhythms, his knees moving in and out. Finally he even lifted one leg balancing in the yoga pose the tree.

Joo then started to croon. “Nobody loves me…” crying and snorting audibly. Sarah Hicks offered Joo some Kleenex. Soon the Kleenex box was passed around as the entire orchestra sobbed, even getting up out of their seats to commiserate. “This is the sad part of the program!” Joo wept. “And that’s because the next piece doesn’t exist.” 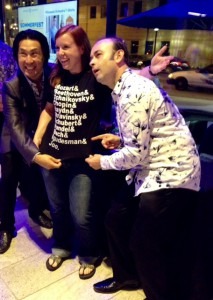 The orchestra next donned Panama hats, sun glasses and the various sections took turns standing during a rhumba. Even the violas got into the act. The principal trumpet started to jam. The percussion section let loose. Overwhelmingly infectious, some musicians started to dance. The audience noticed wiggling from the conductor. She was removing her sparkling pants during the melee revealing a teeny-weeny, super-mini-skirt, black net stockings and spiked heels and grabbing the principal second violinist, danced a smoldering tango. The music director of the orchestra’s Sommerfest, Andrew Litton, unexpectedly entered the stage shaking his head at how naughty everyone was. He sat down at the piano. He gesticulated. He insistently tried to pound out some Gershwin. Nothing seemed to tame the group onstage. The tango came to a close with a deep backward bend and lift from the dancing couple. The audience roared to their feet. Hidden talents revealed by the orchestra. Who knew?

Even as Igudesman swung his hips, jumped into the air and bowed with his right arm thrust under and between his leg his playing was impeccable and impressive.

They have taken the world by storm with their hilarious shows, which combine classical music, theatrics and popular culture. The pair met at the elite Yehudi Menhin School in England when they were twelve years old. Their first collaboration was A Little Nightmare Music produced in 2004, which has evolved into BIG Nightmare Music. They have performed all over the world with major orchestras and collaborate as well with famous classical artists including Emanuel Ax. Joshua Bell, and Bobby McFerrin. Both Igudesman and Joo are active composers. Their dedication to promoting classical music includes leading educational programs at schools and universities.

I & J Rachmaninoff had big hands

The last number brought the house down. Igudesman and Joo and the orchestra performed an infectious Irish folk tune. A dozen musicians got up out of their seats to join Igudesman in the folk fiddle tune while dancing in a chorus line Riverdance style. The choreography—complete with tapping shoes, kicks, and twirls led me to think that they all must have been Irish in another life. Anyone who has played an instrument knows how difficult it is to coordinate just our two hands. Leaping and dancing while playing—precisely and with impeccable ensemble, was a feat. Joo responded to the ovation. “We’re really very hungry.” And then they proceeded to play what I thought was a gutsy choice for an encore—a purely classical, contemporary piece. “Ladies and gentlemen. And now, Mozart.”