Meaning in music is elusive — in fact, there are those who have said that music has no meaning
Alan Gilbert, conductor

Must we always find “meaning” in music? Why can’t our listening experience simply be one of absorbing the sounds which enter our ears without constantly questioning what those sounds might “mean”?

But of course we find meaning in music: it triggers an intuitive, visceral reaction in every one of us, a palpable emotional response, regardless of the genre of the music, and that alone demonstrates that it has meaning. Exactly what that ‘meaning’ is is personal and subjective, and it is this emotional subjectivity in the listening experience that leads me to feel tearfully moved by the slow movement of a piano sonata by Schubert, for example, while others may not feel the same.

This emotional, subjective reaction to music, which we all experience (even those people who say they “don’t know anything about classical music” but can explain how ‘The Lark Ascending’ makes them feel) suggests that the music itself has no meaning, that we invest our personal meaning in the music depending on context. This notion was examined by the composer and scientist Dr David Cope in his explorations of music composed by artificial intelligence: “The feelings that we get from listening to music are something we produce, it’s not there in the notes. It comes from emotional insight in each of us, the music is just the trigger” (interview in The Guardian, 2010). For many of us, classical music in particular is associated with beautiful sadness, deep joy, dramatic battles (between themes or characters), excitement, celebration, reflection, melancholy, tenderness, affection….. The experience of music can be very cathartic for listeners, invoking tears or laughter, with or without reason for the release. 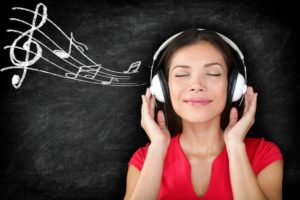 I slightly take issue with Dr Cope’s assertion that feeling is “not there in the notes”, for composers deliberately use various devices in the written score – tempo, dynamics, articulation, harmony, silence – to convey meaning (emotion), and as sentient human beings, just like us, composers experience the full gamut of human emotion which they seek to portray in their music. Performers transmit this meaning through their own response to the score which is based not only on their musical knowledge and expertise, but also their personal emotional response and life experience. And they would not choose to play the music if it did not have some kind of meaning for them. The listener then completes the circle by bringing their own personal emotional reaction to the music.

Music is very powerful. It is very difficult to remain unmoved by music
Daniel Barenboim

Responses to music and interpretations of its ‘meaning’ may also be determined by extrinsic factors, such as the reputation of the composer and/or performer/s (classical music being rather too obsessed with greatness in this regard) or the urban legend or infamy surrounding a certain work (for example, Beethoven‘s ‘Moonlight’ Sonata). It’s curious too how highly virtuosic music often has a greater cultural meaning for audiences and critics than simpler music (is it that the difficulty of the music makes it “better”?), yet many performers would agree that playing Mozart or the very spare music of a composer like Arvo Pärt is actually more challenging. The titles ascribed to certain pieces obviously guide the listener and affect how one responds to them, and programme and liner notes also play a part in influencing how music is heard and understood; if the programme notes suggest that the Andantino of Schubert’s penultimate piano sonata is an expression of anguish because he was dying of syphilis, some people will inevitably hear that anguish in the harsh modulation, frenzied demisemiquavers and dark chromaticism. Even the illustration or photograph on an album cover or concert poster may influence our listening.

Then there are associations which come from other media where certain pieces used in film soundtracks, for example, when heard in concert immediately conjure up emotional responses associated with seeing that film; Also Sprach Zarathustra, a tone poem by Richard Strauss, is for many of us synonymous with space travel after it was used in Kubrick’s 2001: A Space Odyssey. Thus we find meaning through the association of certain pieces of music with personal experiences.

In terms of its construction, every element of music can trigger a response from the listener: a jaunty rhythm or fast tempo may set feet tapping and raise the heartbeat, thus increasing a sense of excitement and energy (think of the opening of Wagner‘s Ride of the Valkyries). A beautiful melody may elicit a sense of serenity, hushed pianissimo sections tenderness or intimacy, a particular interval or suspended harmony poignancy or yearning.

The wonderful thing about music is that it offers the listener an experience of value which can be translated however she/he chooses. So while religious or politically-motivated works of music, for example, may have a specific meaning for the composer in the context of the time when they were written (works by Messiaen or Shostakovich, for instance), or are intended to evoke a specific place, scene or mood, (Schubert’s Trout Quintet, Ravel’s Jeux d’Eau) each listener will take their own experience – and meaning – from that music. The great power of music, regardless of its genre, is that its meaning is ineffable – “where words fail music speaks” (Hans Christian Andersen) – and for many of us music perfectly expresses that which cannot be adequately expressed in words.