Estonian-born composer Arvo Pärt (1935-) has managed to strike a sound of devotional archaism into a world of chaotic modernity. Highly experimental during his early musical career, Pärt’s study of early music inspired a new, and completely unique musical language and vocabulary. Influenced by Orthodox Russian intonations, medieval heterophony and Renaissance polyphony, his music acquired a deeply mystical character. The religious mysticism contained within his compositions emerged as the result of a fresh philosophy towards music and life, which the composer summarized as follows, “Time and timelessness are connected. They represent the instant and eternity struggling within us.” Although his music does not pander to popular taste, Pärt’s approach has nevertheless been enormously well received. His good friend and colleague Steve Reich even suggested, “Pärt’s music fulfils a deep human need that has nothing to do with fashion.” Yet, the path to the sudden atmosphere of stillness and meditation that is so appealing in his music was paved with intense political and personal struggles.

Pärt was born in Paide, in Järva County, Estonia. Raised by his mother and stepfather, he quickly discovered his love for music and began his first serious study at the Tallinn music Middle School in 1954. Briefly interrupting his study for compulsory military service, Pärt eventually enrolled in the Tallinn Conservatory and graduated in 1963. During his student days, he found work as a recording engineer with Estonian radio, and he also composed film and theatre music. Yet almost from the get go, Pärt’s search for a distinct musical identity brought him into direct conflict with Soviet authorities. He was severely criticized for composing Estonia’s first-ever serial work, and further alienated authorities with aggressive and highly complicated collage techniques. With the completion of Credo for mixed chorus, piano solo, and orchestra in 1968, however, Pärt had reached a musical and professional impasse. He simply could go no further! Like a monk, Pärt locked himself in his study and concentrated on exploring Gregorian chant and Renaissance music. After eight years of self-imposed creative exile, the composer emerged with a tonal technique of his own creation. 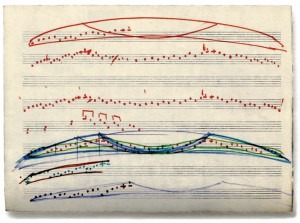 Pärt called this new technique “tintinnabuli,” after the bell-like resemblance of notes in a triad. It basically involves a melodic voice that moves by steps around a central pitch. The tintinnabuli voice simultaneously sounds the notes of the tonic triad. The relationship between these two voices follows a predetermined scheme, which varies in detail from work to work. “The whole secret of tintinnabuli,” according to Pärt, “lays in the two lines. One line is who we are, and the other line is who is holding and takes care of us. Sometimes I say that the melodic line is our reality, our sins. But the other line is forgiving the sins.” The apparent simplicity of its materials draws together the emotional, musical and spiritual aspects of his personality, and creates a soundscape that has been criticized as “sentimental holy minimalism.” Be that as it may, this new style laid the foundation for some of his best-known works, including Fratres, Summa, Tabula Rasa and Cantus in memoriam Benjamin Britten.

The overt religious nature of Pärt’s music neither endeared him to Soviet authorities nor to the academic establishment. In 1980 he and his family emigrated first to Vienna and then to Berlin. A large majority of his compositions since then have been for chorus or small vocal ensemble. The underlying tintinnabuli concept—1+1=1—has remained largely unchanged, but it has undergone a number of technical refinements. His musical vocabulary has shown a tendency to create a more fluid texture by dividing text and music more equally among vocal parts. For Pärt, music has a slightly different meaning for each listener thereby creating a spectrum of musical experiences. It simultaneously sounds ancient and modern, and humbly communicates the spiritual and mystical power that he sees as music’s essential purpose.