The Canario (Italian), or Canarie (French), or Canary (English) dance was inspired, as you tell from the name by a dance from the Canarie Islands. It was popular in Europe in the late 16th and early 17th centuries and appeared in dance manuals of the time, such as Caroso (1581) and Arbeau (1589).

Arbeau was uncertain if the dance came from the Canary Islands or from a staged masquerade where Canario dancers were dressed as exotic kings and queens of Mauritania (or similar savages). 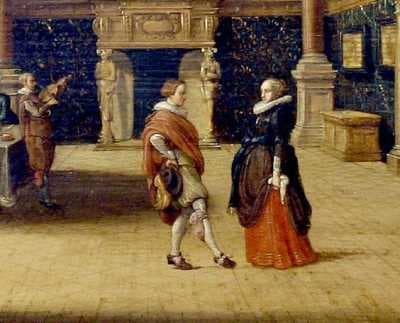 The characteristic steps of the Canario were jumps back and forth and heel taps. According to Arbeau, the man and the woman did these alternately, and we can see that in this video.

The music was fast and energetic and probably was brought to the continent by Canary aboriginal slaves, brought to Europe after Castile conquered these islands off the coast of Africa in the early 15th century. This was why, for Arbeau, the dance carried an air of the exotic and uncivilized, even if he was uncertain if it was native or staged.


It was the highly syncopated rhythms that gave the Canario its distinctive sound and this was used by composers such as Bach in the 7th variation in the Goldberg Variations. 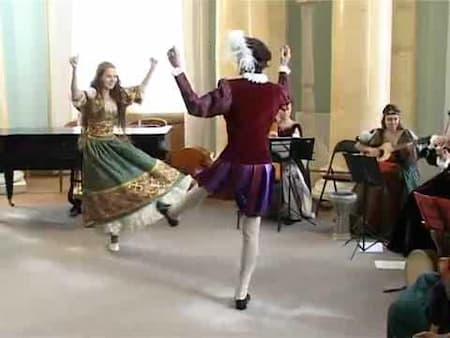 
And in the final gigue movement of the French suite also carries this rhythm.


Because so little of the dance was actually choreographed, one of the ways that the dancers could make variations was to take a set of passages and mix them up (all the dancers had to agree to the patterns) so, for example,

One modern historical dance reconstructor has designed a set of cards that you can carry that has 4 measures of canary solo dance steps on each card – shift and re-sort to create new dance sets!

Lully used them in his operas, such as this set of Canaries from Le bourgeois gentilhomme.


Lorenzo Allegri also took up the dance, too.


It made it into the modern repertoire as well. In the 1927 children’s ballet L’éventail de Jeanne (Jeanne’s Fan), 10 composers, including members of Les Six (Milhaud, Poulenc, and Auric), Ravel, Ibert, Roussel, and others created a joint work to be performed by the children’s ballet school of Jeanne Dubost. Alexis Roland-Manual wrote a Canarie as his contribution to this collaborative work.


A modern writer on the Canary pointed out that the Canario in Europe was one of the few dances from an aboriginal culture that made it into the Renaissance repertoire. This pre-Hispanic folk dance has grown and disassociated itself with its source islands, but remains one of the most vibrant and active of the Renaissance dances.