The Branle was a group dance, performed by couples in a line or in a circle. The name of the dance comes from the French verb ‘branler’, meaning to shake, sway, or wobble because of the sideways steps. After the necessary 4-beat Révérence, where you greet your partner (right foot forward), you start, with a number of steps sideways to the left, matched with smaller steps to the right, with the net effect that the circle would gradually move to the left. 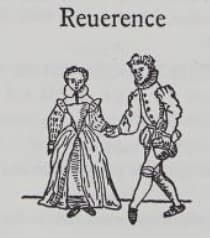 The speed of the music would determine the kind of step the dancers would do, from walking to running, gliding or skipping as the music got faster.


In his 1589 book on social dancing, Orchesography, Thoinot Arbeau gives directions for the branle in both circle and line form. He’s also in favour of slower tempos, saying that they are generally danced better. 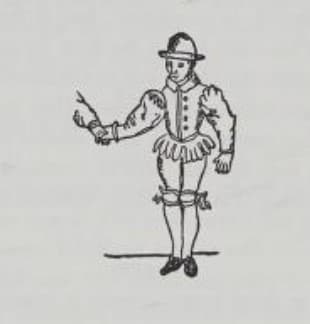 After he describes the simple branle (as above, moving to the left and to the right, gradually circling leftward), he describes the ‘gay branle’, which only moves to the left, but, with each step, the moving foot is held in the air. National branles, such as the Burgundian branle are also detailed. 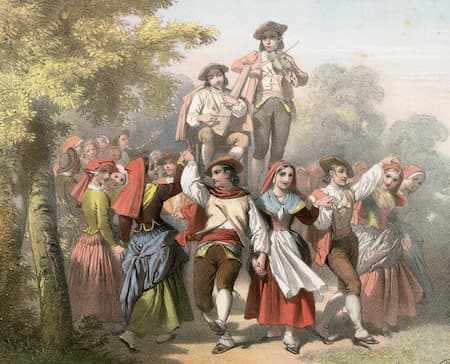 
Arbeau specifies that this branle is ‘danced by lackeys and serving wenches, and sometimes by young men and damsels of gentle birth in a masquerade, disguised as peasants…’. Research shows the branle becoming a court dance by 1558.


The music was generally in duple time, although the occasional one in triple time can be found. Because of the variety of national branles, it became the fashion at court to string them together in sequence, making the first court dance suites.


In the Branle de l’Official, after the moves to the left and right, at the cadence, the ‘men take the women by the waist and assist them to leap into the air and alight upon the said cadence.’


The branle in the modern sense was taken up by composer Carter Pann and he took the English pronunciation of ‘branle’, ‘brawl’, to make a piano dance in 12/8 time that rushes and pauses. The limping, jazzy main melody is undanceable until it’s interrupted by a repeated-note section.


The branle was a simple dance which made it a convenient vehicle for many different versions – one moved sideways, but with a step? A jump? A jump and then you had your foot in the air for a beat? All of the varieties of improvisation of steps could be applied for a quick round or line dance.