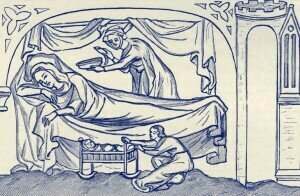 Although rocking cradles are a rarity these days, cradle songs remain a favorite for getting the little one to sleep, and calming the air in general.

One of the most famous of the lullabies was Brahms’ Wiegenlied, which was first published in 1868. It was written for Bertha Faber, whom Brahms had loved when she was young, for the birth of her second son. It is suggested that the melody has a hidden counter-melody referring to a song they both knew.

Brahms: 5 Lieder, Op. 49: No. 4. Wiegenlied (Lullaby) (Monica Groop, mezzo-soprano; Alexei Lubimov, piano)
And, to many people’s surprise, it also shows up in his Symphony No. 2, written in 1877. Listen at 02:00 where the low strings bring in the familiar melody.

Brahms: Symphony No. 2 in D Major, Op. 73: I. Allegro non troppo (London Philharmonic Orchestra; Marin Alsop, cond.)
The Australian composer Percy Grainger made his own arrangement of Brahms’ lullaby adding arpeggios and moving the melody to a middle voice.

Another name for lullaby is ‘berceuse’ and composers in the 19th and 20th century all made contributions to the genre. 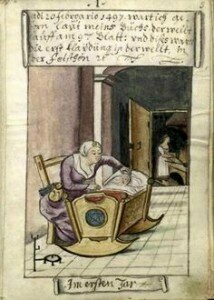 Rocked in his cradle

Chopin’s Berceuse of 1844 set the model for the high-art cradle song – it’s simple and charming, but elegant, and was probably written for the daughter of the singer Pauline Viardot.

Chopin: Berceuse in D-Flat Major, Op. 57 (Rafael Orozco, piano)
Chopin’s model was followed by many, including Liszt, who took this as his own inspiration.

Liszt: Berceuse, S174b/R57b (Jenő Jandó, piano)
Tchaikovsky took up the berceuse in his 18 small piano pieces, written about half a year before his death. It captures the calm tone established by Chopin, but all carries a certain melancholy.

Tchaikovsky: 18 Morceaux, Op. 72: No. 2. Berceuse (Konstantin Shamray, piano)
Gabriel Fauré wrote two berceuses, one as part of the Dolly Suite and another earlier. His first Berceuse, written in 1879, was somewhat of a tainted gift, as it became very popular and, at the same time, kept people from appreciating him as a more serious composer. 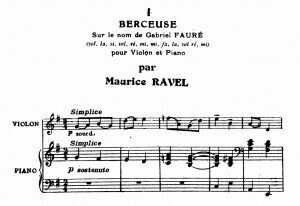 Dolly, the pet name of the daughter of singer Emma Bardac, had her life set to music by Fauré in the Dolly Suite, starting with her cradle song and ending, 6 movements later, dancing in her garden.

Fauré: Dolly Suite, Op. 56: I. Berceuse (RTE Sinfonietta; John Georgiadis, cond.)
Maurice Ravel’s Berceuse sur le nom de Gabriel Fauré of 1922 was part of a larger set of works written by Fauré’s students. While understanding what a berceuse was, Ravel, at the same time, changed it – he used the letters of Gabriel Fauré’s name as the source for his melody. At the top of the score Ravel wrote, under Fauré’s name: (sol, la si sol, ré, mi, mi, fa, la, sol, ré, mi).

Ravel: Berceuse sur le nom de Gabriel Fauré (Dmitry Sitkovetsky, violin; Bella Davidovich, piano)
Another un-berceuse-like cradle song is in Stravinsky’s ballet The Firebird. The Firebird helps Prince Ivan by making the Evil Kastchei and his henchmen fall asleep so that Prince Ivan can discover the source of Kastchei’s immortality and destroy it. This is a mesmerizing melody, intended to ensorcell an army, not children.

Stravinsky: The Firebird: Scene I: The Firebird’s Lullaby (Philharmonia Orchestra; Robert Craft, cond.)
We’ll end with a quiet song by Charles Ives, set to his own text, which appeared in his 114 Songs collection.