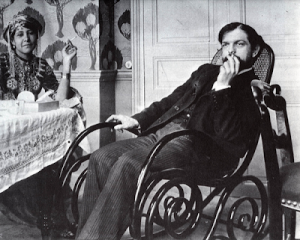 As far as women were concerned, Claude Debussy was a bastard! “There was a woman at each crossroad of Debussy’s life,” Marcel Dietschy writes. “Certainly women of all ages seemed fascinated by him, and they attached themselves to him like ivy to a wall.” In turn, he drove two women towards attempted suicides with revolvers, and was completely incapable of selfless love for anyone except his daughter. But let’s not get ahead of ourselves. Once he had separated from Gaby, he was deadly afraid to be alone. And so he found Rosalie Lilly Texier, a beautiful mannequin, whom he first met in the spring of 1899. “She is unbelievably fair and pretty, like some character from an old legend,” he writes. “Her favourite song is a roundelay about a grenadier with a red face who wears a hat on one side like an old campaigner, not very provoking aesthetically… She does not have much up top.” Gaby warned Lilly of Debussy’s extracurricular activities, and although Lilly hesitated before saying her “I do,” the couple got married on 19 October 1899. Apparently, Debussy had threatened to kill himself if she refused to marry him. Erik Satie witnessed the happy occasion, and Debussy paid for the wedding breakfast with proceeds from a piano lesson he had given that morning. 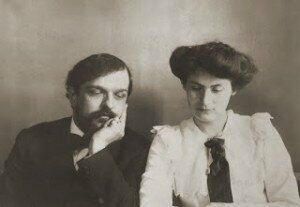 Debussy and his wife Lilly

The dedication to “Sirenes” from his Nocturnes reads, “This manuscript belongs to my little Lilly-Lilo. All rights reserved. It is proof of the deep and passionate joy I feel at being her husband.” The couple enjoyed three years of happiness, with Lilly devotedly supportive of Debussy, jealously guarding his privacy and remaining content to live in poverty in his shadow. By all accounts, she was “affectionate, practical, straightforward and well-liked by Debussy’s friends and associates.” However, he soon found her unstimulating and overly possessive. And one slowly increasing source of disappointment was her inability to bear children. By 1903, married life had begun to lose its luster. He secretly admitted that her “voice and shrill laughter grated on his nerves.” At age 30 she was aging prematurely, developing jowls and her eyes becoming ever more “doe-like.” Still childless and sometimes short of money, in his correspondence with others Lilly became “my poor wife.” Debussy was clearly bored with Lilly. 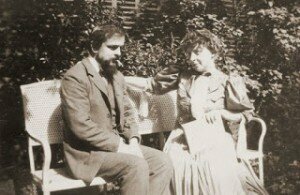 Emma Bardac, wife of Parisian banker Sigismond Bardac was no stranger to extra-marital affairs. Her liaison with Gabriel Fauré had inspired the song-cycle La bonne chanson in the early 1890s. Debussy first met her on 1 October 1903, and their friendship developed rapidly during the early months of 1904. Thanking her for some flowers, Debussy wrote “I am made profoundly happy by your thought… Forgive me if I have kissed all these flowers as though they formed a human mouth.” Bardac was sophisticated, a brilliant conversationalist, and an accomplished singer. On 15 July, Debussy put Lilly on a train to her parents in Bichain, and secretly took Bardac to Jersey for a holiday. For all the passion, Debussy still had to tell Lilly that he was moving out. Lilly threatened suicide at least four times, but on the eve of their fifth wedding anniversary, she went to the Place de la Concorde, pointed a revolver at herself and fired. She survived, but the bullet remained lodged in her vertebrae for the rest of her life. Mary Garden reports, “And laying underneath Lilly’s left breast was a round dark hole where the bullet had gone in, without touching anything vital… That little token of her love for Claude Debussy stayed with her until she died in 1932.” Debussy never visited Lilly at the clinic, nor did he pay her bills. By now, he was a public figure and Lilly’s attempted suicide received coverage in every newspaper in the city. The scandal alienated a number of friends, with Fauré refusing to speak to him. By 2 August 1905 his divorce from Lilly was finalized, and since Paris had become unbearable for Debussy and Emma, they left for England. 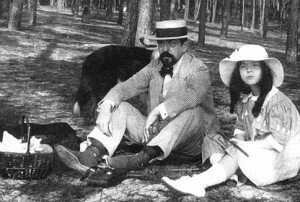 Before departing, Debussy wrote to a friend, “You should know how many people have deserted me. It is enough to make one sick of everyone called man… Morally, I have suffered terribly… I don’t know, but I’ve often had to smile so that no one should see that I was going to cry.” Emma was by now seven months pregnant, and Claude Emma Debussy — known to all as Chouchou — was born on 30 October 1905 back in Paris. Debussy was besotted with his Chouchou, but life wasn’t entirely idyllic, as Emma’s uncle, the financier Osiris, had disinherited her in his will. The Lilly scandal still haunted them, and it even reached the stage in a thinly disguised melodrama by Henry Bataille called La femme nue. Debussy married Emma on 20 January 1908, but once again, married life was not agreeable. Emma was frequently ill, constantly possessive and extravagant, and far less easy to pacify than the devoted Lilly had been. Debussy frequently retreated to the sanctuary of his study and wrote notes to Emma in preference to actually having a conversation. During a matrimonial crisis in 1910, Emma actually wrote to her lawyer to enquire about a trial separation as she came to despise his “inaction, continued indiscretions, moral cowardice, self-pity and much-vaunted hypersensitivity.” Debussy, of course was acutely aware of his failings as he wrote, “in everyday life I stumble over the smallest pebble, which another man would send flying with a light-hearted kick.” Art, it seems, was his one and only lover.