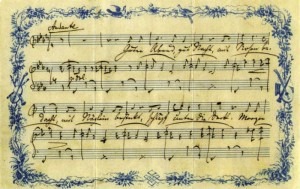 Between 1859 and 1862, Johannes Brahms eagerly participated in the musical and social life of his native city of Hamburg. Clearly, he was looking to establish the foundations for what he hoped would be a lifelong career in his hometown. Thanks to the efforts of colleagues and friends, his music was performed at important occasions and venues, and he featured as soloist with the Hamburg Philharmonic. He composed and arranged music, edited and published a number of early music scores, and gave piano lessons to cultured young women of considerable social standing. In addition, and much to his delight, he conducted a small chorus of about forty enthusiastic young women! The Hamburg Women’s Chorus met at least once a week, with a smaller group of about a dozen singers meeting for additional rehearsals. And there was even a solo quartet drawn from the best singers. Brahms invested considerable time and energy in arranging and composing music for the group.

Yet music was not the only exciting thing associated with the Hamburg Women’s Chorus! There was Bertha Porubsky, the daughter of a Protestant pastor on assignment in Vienna. Bertha was spending a year in Hamburg, closely chaperoned by her aunt Auguste Brandt. Brahms was invited to their house, and since the way to a man’s heart apparently goes through his stomach, Bertha cooked up a Viennese storm for her esteemed choirmaster. And as it happens, Johannes and Bertha were sufficiently smitten with each other to engage in a lively correspondence, all through the medium of Aunt Auguste. Brahms writes from Detmold on 9 October 1859, “Most revered, dear friend, I wish you had seen my delighted face when I found your letters. The first lovely handwriting was already familiar, I had indeed looked upon it that last evening in Hamburg, and how often, since then…I am in love with music, I think of nothing but, and I am composing love songs again! If it continues like this I may evaporate into a chord and float off into the air.” A couple weeks later, Brahms indignantly asked, “But why do you make a secret of our ongoing exchange of letter? If someone should ask me, which is not at all impossible, I could hardly repudiate it? Incidentally, ‘Dear Herr Johannes’ would please me much better than ‘Dear Herr Brahms,’ which is not a lovely salutation.” Brahms was clearly in love, and so was Bertha. However, in a pattern that would continue to repeat for the rest of his life, Brahms abruptly stopped all communication and withdrew from the relationship. Bertha had simply gotten too close for comfort!

Johannes Brahms: Wiegenlied Op. 49, No. 4
When Brahms arrived in Vienna a year later, his guilty conscience was much relieved to discover that Bertha was about to marry the rich industrialist Arthur Faber. And it was on the occasion of the birth of Bertha’s second son that Brahms wrote his most famous melody. Brahms sent the Wiegenlied (Lullaby), Op. 49, No. 4 to Bertha’s husband and wrote “Frau Bertha will realize that I wrote the ‘Wiegenlied’ for her little one. She will find it quite in order that while she is singing Hans to sleep, a love song is being sung to her.” In typical Brahms fashion, this turns out to be a musical cypher. Apparently, Bertha sung a Viennese Ländler to Brahms during her time in Hamburg—which is the love song that Brahms is alluding to in his letter—and the newly composed lullaby melody for Hans was composed as a counterpoint. As we all know, the “Wiegenlied” became hugely popular around the word, with countless and varied arrangements appearing overnight. Brahms, characteristically, was rather unhappy that amateurs tinkered with his music and he gruffly reprimanded his publisher, “Why don’t you make an edition in a minor key for naughty or sick children? I am sure that would help you to shift more copies.”