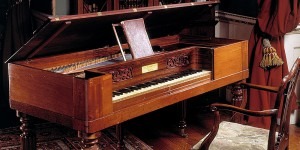 The Alex Cobbe Collection at Hatchlands, near Guilford, Surry, holds an interesting variety of pianos, most with composer connections. When we look at a composer’s piano, for the most part, we can only imagine what works were created on it. For one piano, however, we do know what music was written on those keys because the composer wrote his works list onto the piano.

Edward Elgar (1857-1834) used an instrument that was built over a decade before he was born. He had it moved from the piano business that his father and his uncle ran in Worcester to his beloved cottage near Malvern. The instrument is a beautiful square piano with very heavy turned wooden legs.

This piano, owned by the Royal College of Music and on loan to the Cobbe Collection, has a fairly wooden sound and none of the resonance we hear in the larger grand pianos.

Elgar – Nimrod from The Enigma Variations, Op. 36 (the composer’s own piano version)

Written inside the piano is a short list of some of the works Elgar created on the keyboard:

Despite its sound, this instrument was used for the creation of some of the great works of Elgar’s career, such as the choral cantata Caractacus, Op.35. He had started to sketch this in 1887 and it was completed for its première in Leeds on 5 October 1898, with Elgar conducting. This excerpt, Woodland Interlude, depicts “A forest near the Severn: Morning.”

Edward Elgar: Caractacus, Op. 35: Woodland Interlude. Bournemouth Sinfonietta; Norman Del Mar, Conductor.
It was also used for the work for alto and orchestra, Sea Pictures, Op. 37, which received its first performance at the Norwich Festival on 5 October 1899, with Clara Butt as soloist. 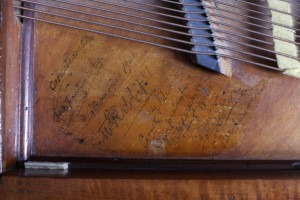 Edward Elgar: Sea Pictures, Op. 37: I. Sea Slumber-Song. Sarah Connolly, mezzo-soprano; BBC Symphony Orchestra; Andrew Davis, Conductor
His oratorio, The Dream of Gerontius, Op. 38, was also written here and was given its première at Birmingham Town Hall on 3 October 1900, with Hans Richter conducting. The work, now regarded as a monumental work in the English choral-orchestral tradition, was highly controversial at its première and during its early life. For an early performance in 1903 at Worcester Cathedral during the Three Choirs Festival, the Bishop of Worcester insisted on changes in the text to remove elements that were thought to be too “popish,” such as references to the Virgin Mary, to Purgatory, and to the Mass. Its Wagnerian climax towards the end of the second part give us a nearly Parsifal-like sound.