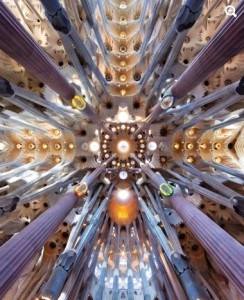 The unfinished church of “Sagrada Familia” in Barcelona is Antoni Gaudí’s exceptional creative contribution to the development of architecture in the late 19th and early 20th centuries. George Orwell called it “one of the most hideous buildings in the world!” And the architect Enric Massip, a member of the Advisory Committee to the City of Barcelona, declared the basilica “an artificially inflated space lacking in soul.” Yet, Salvador Dalí spoke of its “terrifying and edible beauty,” and Louis Sullivan, the father of the skyscraper, described it as “spirit symbolized in stone.” Looking at the surface, the building reveals a richly decorated exterior of seemingly arbitrary forms. However, just below that surface is a world of advanced mathematics and cutting-edge structural engineering. In fact, the helicoids, hyperboloids and hyperbolic paraboloids are forms abstracted from nature itself, and translated into the design of the columns, vaults and intersecting geometric elements of the structure. For Gaudí, the cathedral was the perfect combination of natural shapes and inorganic materials. “The architect of the future,” he told us, “will build imitating Nature, for it is the most rational, long-lasting and economical of all methods.” Above all, “Sagrada Familia” is a glowing celebration of the beauty of living things. 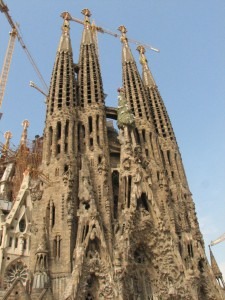 When Gaudí’s instructor at the Architecture Academy in Barcelona saw the melting concrete shapes—as if liquid had been trapped in mid-stream—he signed his diploma and said, “Who knows if we have given this diploma to a nut or a genius. Time will tell.” Time has indeed told, as seven properties in or near Barcelona testify to Gaudí’s eclectic and highly personal style. Born in the small town of Reus near Barcelona in 1852, Antoni Gaudí showed an early interest in architecture. His architectural studies in Barcelona placed him within the intellectual context of the “Moderisme” movement, an artistic direction that paralleled the Arts and Crafts movement in England and the Art Nouveau practiced on the continent. Yet “Moderisme” in the Catalan region was an intense expression of national distinctiveness, and an important factor in the establishment of popular cultural identity. By 1883, Gaudí created masterpieces of organic shapes, living forms, and natural contours. Commissioned by a rich industrialist, Gaudí provided a series of painted wall decorations for the luxury villa of El Capricho. Merely a year later he designed the spectacular pavilions of the Güell estate, including a phenomenal dragon gate. 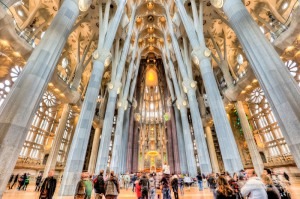 Concordantly, he started his involvement with “Sagrada Famila.” Construction began in 1882 and has continued until today. Gaudí will not see the completion of his vision, as he died in a street accident in 1926. But he certainly believed that God had all the time in the world, famously stating “my client is in no particular hurry.” Slated for completion in 2026, “Sagrada Familia” will be the world’s tallest church, reaching 170 meters into the Catalan sky. One of the most controversial places of worship ever built on such an epic scale the cathedral expresses his unique vision of spatial qualities and plasticity in the undulating lines and harmonies of colors and materials. Yet it is deeply spiritual! Gaudí was a devout and ardent Catholic, and the natural flow of Gregorian chant was ever on his mind; he even took courses in Gregorian chant. “Sagrada Familia” is not merely the result of his exceptional mathematical and geometrical imagination, it is music sculptured in stone!