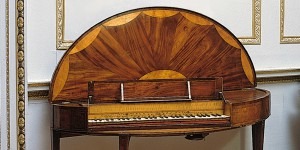 The Alex Cobbe Collection of composer’s pianos is a collection that can give us a feeling for how pianos developed, often in response to the demands of composers.

The square piano, called that despite the fact that they’re actually rectangles, were pianos that were created to fit into the home. Often, they could be disguised as furniture until you remove the pictures and the flower, you remove the cloth, lift the lid and, voilà, it becomes a piano.

One piece in the Cobbe Collection comes in the shape of a half-moon table, hiding a small square piano.

The cabinetry is beautiful and is thought to be by the Dublin cabinet maker William Moore. The interior piano was built circa 1785 by Irishman William Southwell, who had opened his own shop in Dublin by 1782. Because this is a piano that doubles as a piece of furniture, certain elements that would be otherwise prominent in a piano, such as the pedals, have to be disguised. When you look on the underside of the piano, you’ll see a swing-down swell-lever that would have been operated by the pianist’s knee.

The sound of the piano is suited for a small room and an intimate atmosphere.

Another Southwell piano in the collection shows the innovations that he created and patented. Composers wanted pianos with more notes (the usual 18th century piano was only 5 octaves) and, at the same time, consumers wanted pianos that wouldn’t dominate a room. Southwell’s patent from 1794 was important in making 5 ½ octaves the new standard, through adding extra high keys, while still maintaining the original size of the piano. 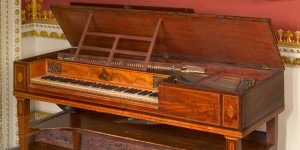 The music written for this piano, in our example by Southwell himself, takes advantage of these new treble strings by specifically writing for them.