In Tune Society
Scriabin made me do it!
by Georg Predota March 25th, 2015
Tags: Scriabin 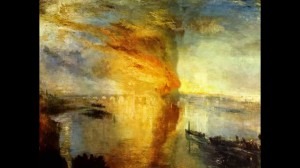 The power of music is just awesome! Trumpets shattered the walls of Jericho, and when Orpheus tenderly tickled his lute, his dead wife Euridice returned to life. Given such enormous powers, you better be careful because listening to music can turn you into a homicidal maniac. And I am not talking about listening to Nine Inch Nails, Marilyn Mason or Gangsta Rap!

According to a case in the Hong Kong Courts, repeatedly listening to Alexander Scriabin’s Vers la Flamme (Toward the Flame) led a Hong Kong man to kill and butcher his parents. The defending psychiatrist claimed that his client listened to the piece every night for a whole month. “The music intensified the images of fire and flame in his mind. He believed the world was going to end and he could not get away from it. The music was like repeating the words to him every day.” It seems that listening to Scriabin simultaneously induced thoughts of suicide and killing, as well as elevating him to God-like status. The defendant reports, “feeling brave enough to touch the tights of a woman he did not know on a bus.”

While the emotional power of classical music should never be underestimated, listening to Bach’s Goldberg Variations will generally not make you hungry for human intestines. And listening to Vers la Flamme will not trigger murdering rampages. The underlying psychological disorders are the fundamental issues, and should have been picked up much earlier. According to the psychiatrist, his client “expected to kill somebody before he turned 30,” and the fact that he actually did has little to do with Scriabin. However, just in case I am wrong, you better listen to a bit of Mozart while reading this article!