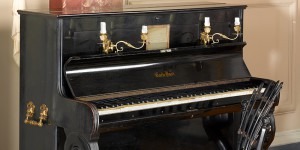 The Alex Cobbe collection outside Guildford, England, holds a unique piano created for a unique performer. During Franz Liszt’s trips to Florence after 1873, he was loaned a piano by its maker, Carlo Ducci. This isn’t a multi-foot grand piano but a simple upright with attached sconces for candles and handles on the side for help when moving it. 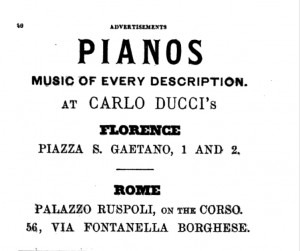 Carlo Ducci came from a family of instrument builders and his brother, Giuseppe, has an earlier instrument in his name. This piano is stamped No. 1 and appears to be the only piano Carlo Ducci ever made.

Liszt: San Francesco (Preludio per Il cantico del Sol di San Francesco), S499a
We know that Ducci dealt in pianos at this time from an ad we find in Galignani’s Illustrated Paris Guide For 1880:

From Liszt’s letters, we have a better idea of the role Carlo Ducci played in the instrumental world of Florence. In addition to this piano, Ducci was generous in loaning other pianos to Liszt. In a letter to the Baroness Olga von Meyendorff dated 12 September 1878, Liszt tells her: 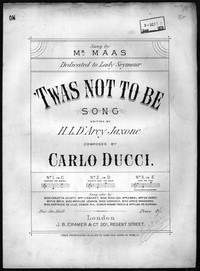 Thanks to the kindness of M. Carlo Ducci, who between Florence and Rome has more than two hundred pianos for hire, I shall have a superb Erard at the Villa d’Este plus a fine Knaps (from Dresden) which Ducci wants to lend me in case any “first-class pianists” would like to play two pianos with me at home.

We can confirm the connection because of a note with the piano from Liszt thanking Ducci for the loan of the instrument. Since we associate composer’s pianos with big grand pianos, it’s curious to see this little upright as being used by Liszt.