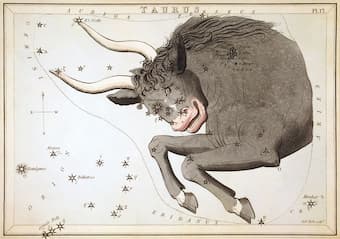 Between 20 April and 20 May, the “Great Bull of Heaven” charges across the celestial sky. The constellation Taurus, according to Greek mythology, depicts the god Zeus changing himself into a beautiful white Bull. Zeus was rather famous for changing into various guises in order to seduce unsuspecting maidens. And such was the case in his bull transformation, as the object of his fancy was the Phoenician princess Europa. According to the legend, Europa jumped on the Bull’s back and Zeus swam across the Mediterranean Sea all the way to the island of Crete. Zeus and Europa became the parents of Minos, the legendary king of Crete, who after his death became a judge of the dead in the underworld. 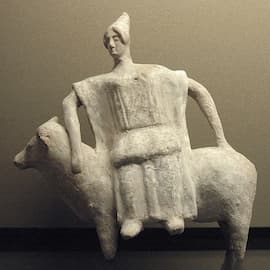 Mythology aside, Taurus is one of the most spectacular constellations in the nighttime sky, featuring the brilliant star Aldebaran and Elnath, and two fine star clusters. Taurus is considered the most reliable sign of the zodiac, “ready to endure and stick to their choices until they reach the point of personal satisfaction.” The composer
Richard Rodney Bennet (1936-2012) proudly wrote, “I don’t teach any more. I do the occasional lecture. I’m not on any committees; I’m not on any prize juries, and it’s perfectly wonderful.” How is that for personal satisfaction? Bennet composed the complete Zodiac, and there is plenty of passion in his “Taurus” setting. 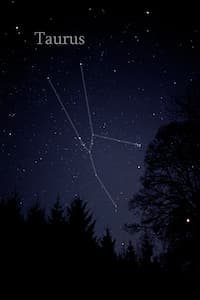 Individuals born under the sign of the celestial oxen are supposedly firmly grounded. They have the ability to see things from a practical and realistic perspective. Frequently, they labour on the same project for many years before leading it to a successful completion. The Taurus individual comes across as a person of few words and a decidedly stubborn disposition. Given some of the characteristic so far, Johannes Brahms, born on 7 May 1833 might well be the poster child for this celestial sign. 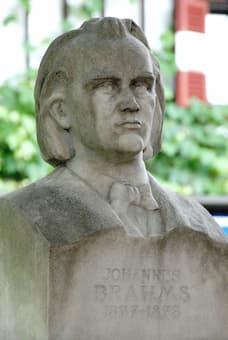 We know that it took him almost 20 years to finally issue his first symphony. In just about everything Brahms touched during his life, he was stable and conservative and ready to stick to his musical and personal choices until it reached a point of personal satisfaction. In his music, he destroyed and discarded what could not be completed, and his personal life was governed by his determination to not get married. He did adore Clara Schuman, but preferred a succession of infatuations with young singers and transactions with prostitutes. Brahms was deliberately secretive about his life and feelings, and the only avenue to an understanding of his complicated Taurus personality is provided by his music. 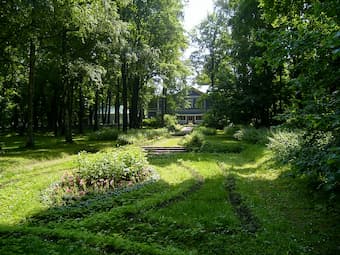 Venus, the planet of love, attraction, beauty, satisfaction, creativity and gratitude rules individuals born under the sign of Taurus. Apparently this gives them a “tender nature and makes them excellent cooks, gardeners, lovers, and artists.” Born on 7 May 1840, Pyotr Ilyich Tchaikovsky was indeed a keen gardener, and he “loved our Russian nature more than any other.” His personal garden in Klin was like an idealized forest, with a winding path and a gazebo at the far end from the house. Tchaikovsky adored flowers, particularly the wild flowers of the fields and forest that he saw on his daily walks. He was especially fond of the lily of the valley, to which he even wrote a poem. I am not sure about Tchaikovsky’s culinary expertise, but his love life has certainly been probed from every delicious angle; I’ll give this slippery subject a miss this time. 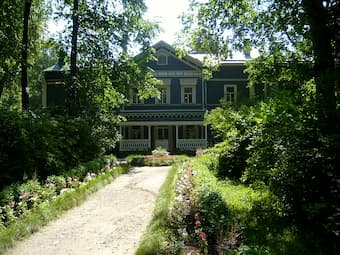 The Tchaikovsky House-Museum in Klin

There can be no doubt, however, that Tchaikovsky was artistically supremely gifted. His music, above all, reflects human emotion and the rollercoaster ride of the human experience. Tchaikovsky tellingly wrote, “I have found nothing—neither religion nor philosophy, to ease my troubled soul. But I would go mad were it not for music. Music is heaven’s best gift to humanity. It alone clarifies, reconciles and consoles.” In agreement with the emotional attributes of the tropic of Taurus, Tchaikovsky took criticism to heart, and he was prone to extended bouts of guilt, depression and self-pity. However, he always had the ability to eventually interject a practical voice of reason into any chaotic and potentially unhealthy situation. 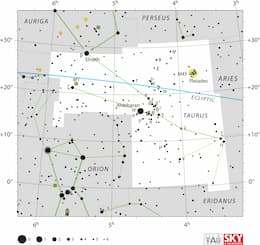 Erik Satie was born on 17 May 1866. If we can trust his birth certificate and the calendar, then he is definitely a Taurus. However, when eccentricity and classical music are used in the same sentence, his name immediately comes to mind. Irreverent, disrespectful, contemptuous of tradition, forcefully direct and brutally honest, Satie famously wrote underneath his self-portrait, “I have come into the world very young, into an era very old.” 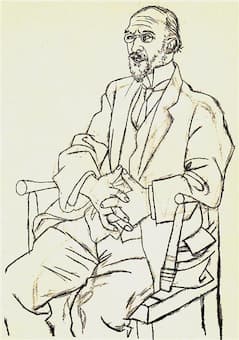 Satie was decidedly rebellious, ruthless, scathing and always proudly independent. A keen observer of life, he artistically encoded his impressions with a thick layer of satire and parody that nevertheless hid a philosophical and deeply spiritual side. His contempt for tradition, his rye humor and his loyalty to the absurd are always refreshingly eccentric, not to mention really funny. Following his death, Satie was predictably vilified by an artistic world that felt alienated by his explosive rages and seemingly irrational behavior. It was John Cage in the 1960’s who elevated Satie once more to cult status. Tellingly Cage wrote, “Satie is indispensable to the development of contemporary music.” That may well be the case, but except for his determination to be different there is very little Taurus in his personality or in his music. 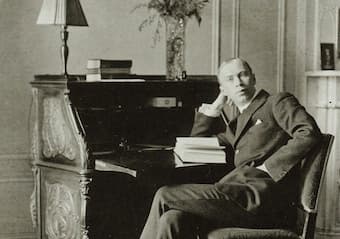 A well-meaning astrological magazine writes, “If you are in search of a strong, loyal and generous man, Taurus is the person you are looking for. He is trustworthy, patient and tender when in love, always in search for a returned emotion.” I suppose that means that Sergei Prokofiev, born on 27 April 1891, is definitely not of Taurus disposition. He was one of the twentieth century’s most brilliant composers, and he definitely knew it. In fact, he was so confident in his musical abilities that he never attempted to conceal the more disagreeable aspects of his character or behavior. He likened his first wife to “an infected tooth,” and called her a “freak and an idiot.” He mocked her devotion to him, and “romantic commitment,” as the composer related, “is too foreign for a person living in the abstract world of sound.” In addition, Prokofiev was completely indifferent to criticism, and when a venomous review asserted, “the cats on the roof make better music,” he told his critics to go to hell. Like Satie, Prokofiev was certainly uncompromising in terms of his artistic goals and expressions. Is that enough to make him a characteristic member of the Tropic of Taurus?