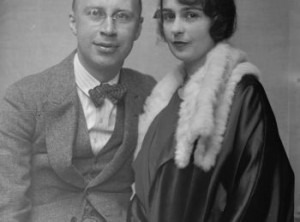 Sergei Prokofiev was one of the twentieth century’s most brilliant composers, and he definitely knew it. In fact, he was so confident in his musical abilities that he never attempted to conceal the more disagreeable aspects of his character or behavior. Given Prokofiev’s irresistible talent, it was rather natural that he would attract a steady following from members of the opposite sex. His concertizing activities initially took him across the globe, and by 1918 Prokofiev had made his way to America. Immigration authorities in San Francisco took him for a spy, and he soon made his way to New York. There he gave his debut recital in Carnegie Hall that established his musical reputation abroad. On the backstage he met Carolina Codina, an amazingly beautiful and extravagant Spanish-born singer who went under the stage name of Lina Llubera. Lina was born to a Spanish father and a Russian mother in Madrid, but raised in Brooklyn, New York. She was fluent in five European languages and mesmerized by Sergei’s “phlegmatic demeanor and blistering technique at the keyboard.” It marked the beginning of a love that she later describes as “one of the two great heartaches of her life.” 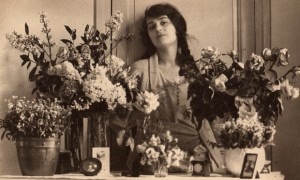 The period of initial courtship and romance was predictably pure bliss. Romantic attachment aside, the couple traveled together and formed a successful professional union. They gave a number of performances, premiering among others his Five Songs Op. 36 dedicated to Lina, and they managed to attend every cocktail party and social gathering within a 100-mile radius. Yet, love tends to ignore important warning signs. She complained of his rudeness and he promised to improve. When she cancelled a date, he told her “he could always find someone else.” Crisscrossing Europe, Lina kept up her stage ambition, but after four years without a marriage proposal, she threatened to walk out on him. Apparently he told her to go ahead, yet as fate will have it, she became pregnant. The couple married in October 1923 in Ettal, Germany. For Prokofiev, who thoroughly enjoyed his life as a cosmopolitan artist—forming romantic attachments in different countries during his tours—married life was simply not agreeable. For the next 12 years the couple lived in Paris, with marital relations growing more strained every day. He likened her to “an infected tooth,” and called her a “freak and an idiot.” He also mocked Lina’s devotion to him and accused her of pursuing him only so that she could “pose before the world” as his wife while her own soprano career stalled. For Prokofiev, romantic commitment was “too foreign for a person living in the abstract world of sound.” Lina had given birth to a second son in 1928, yet things got even more difficult when Sergei insisted that they move permanently to the Soviet Union in 1936. 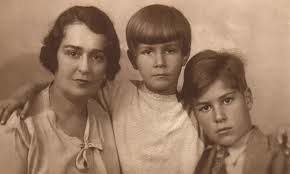 Prokofiev had always kept in favor with the Soviet regime. He easily adapted to the culture and the country he had known from childhood, but Lina found it impossible to adjust. Living in Moscow at the start of the Great Terror was no easy task. One concert night at the Conservatoire, “she locked eyes with Stalin, whose look was so piercing that she flinched,” Prokofiev wrote in his diary. Neighbors were dragged from their beds by secret police in the middle of the night, and Lina was seriously alarmed. “You don’t know what you’re getting into,” she warned Sergei. Prokofiev answered his wife’s concern by starting an affair with the writer Mira Mendelson, 24 years his junior. By 1941, he had walked out on Lina and the boys, who had to fend for their lives in the face of the German invasion. Prokofiev would eventually divorce Lina in 1947, and he quickly married Mira in early 1948. On 20 February 1948, Lina was arrested by secret police, and accused of mingling with foreigners. Driven to the infamous Lubyanka prison, she was interrogated, tortured and sentenced to 20 years of hard labor in the Siberian gulag. Prokofiev apparently did nothing to defend or to secure the release of his wife, yet she remained true and loyal to her husband. She didn’t even know, nor would she ever accept that Sergei had long divorced her. Prokofiev died on 5 March 1953, but it would be another three years before Lina was released from Siberia. It took another 18 years before she was allowed to leave Russia! Lina obtained full exoneration and reinstatement of her marital rights, and spent her final years in devotion to the memory of her husband. Lina died on 3 January 1989 at age 91.