Escaping the stifling summer heat of Vienna, Beethoven enjoyed spending his summer months in the countryside. And he seemed to have preferred the wine-growing villages to the northwest of the city. Bordering the hills of the Vienna Woods, the area of Döbling—currently the 19th Viennese District—is home to the villages of Grinzing and Nussdorf. 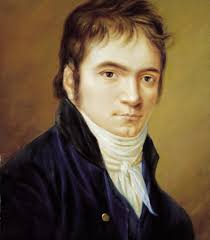 A favorite recreation area for affluent Viennese and countless tourists, the entire area is dotted with traditional taverns where vintners serve their new wine. Vineyards also carpet the slopes of Kahlenberg, with sweeping views of the Danube and the city of Vienna. In 1803, Beethoven took up summer residence at Döblinger Hauptstrasse 92 in a building called “Biederhof.” The building has since undergone major renovations in the 19th and 20th centuries, and today is part of the historical sites administrated as “Vienna Museums.” Aptly named “Eroicahaus,” it was at this location that Beethoven wrote a large portion of his Eroica Symphony between May and November 1803. 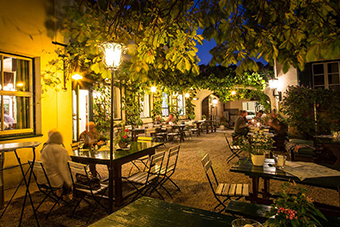 An Austrian Heuriger in Grinzing

The summer of 1803 was not a happy period for Beethoven. A friend writes, “you cannot conceive what an indescribably, I might say fearful, effect the gradual loss of his hearing has had on him.” It seems, however, that Beethoven single-mindedly channeled his frustrations into the composition of his Eroica symphony. The sketches show a minimum of false starts and detours, and the most radical musical ideas are present from the start. Beethoven proceeded with great assurance, and the scope, almost bewildering originality and continuous technical certainty manifested is truly striking. In fact, he personalized the political symphony. From the very beginning it was conceived as a tribute not to the idea of revolution but to the revolutionary hero, Napoleon, and really to Beethoven himself. And while we all know that Beethoven subsequently changed the dedication, concertgoers then and now have emotionally responded to Beethoven’s heroic quest and spiritual journey.