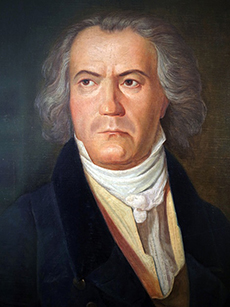 Louis Schlösser was a young violinist from Darmstadt. In the spring of 1822 he took leave from his post in order to travel and broaden his knowledge by studying with foreign artists. When he arrived in Vienna, he unsuccessfully tried to meet Beethoven for several months. Eventually, he was given the opportunity to visit Beethoven on an errand from Baron von Türkheim. Schlösser would subsequently publish his “Personal Reminiscences of Beethoven,” and that includes a detailed description of Beethoven’s lair in Kothgasse 60. Beethoven had moved into that particular dwelling on 23 October 1822 and would remain there until 25 July 1823. Schlösser writes, “Climbing up the dark stairs to the first story of Kothgasse No. 60, I was instructed to knock on the door on the left. Finding no servant or maid, I opened the door which led into the kitchen through which one has to pass to gain the living rooms. After repeatedly knocking in vain at the real living-room door, I entered and found myself in a rather commodious but entirely undecorated apartment.” 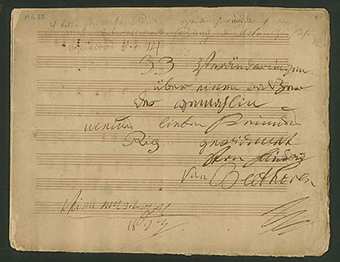 “All I saw,” Schlösser writes, “was a large, four-square oak table with various chairs, which presented a somewhat chaotic aspect that stood in the middle of the room. On it laid some writing books and lead pencils, music paper and pens, a chronometer, a metronome, an ear trumpet made of yellow metal and various other things. On the wall at the left of the door was a bed, completely covered with music, scores and manuscripts. I can recall only a framed oil painting with a portrait of Beethoven’s grandfather, for whom, as is known, he had a child-like reverence. Two deep window-niches covered with smooth paneling I mention only because in the first a violin and bow hung from a nail, and in the other Beethoven himself, his back to me, stood busily writing down figures and the likes on the wood, already covered with scribbling.” Remarkable, this humble abode witnessed the near-completion of three gigantic works; the Diabelli Variations, the Missa Solemnis and the Ninth Symphony!