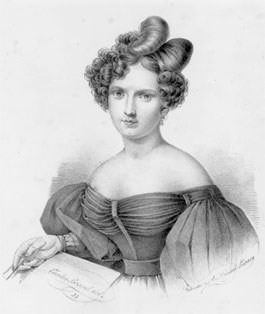 For a couple of short months in 1822, Beethoven took quarters at Obere Pfarrgasse, currently 22 Laimgrubengasse. We don’t have any particular knowledge of the apartment’s interior, but it is mentioned in connection with the revival of Fidelio, which took place on 3 November 1822. Billed as a benefit performance for the 17-year old Wilhelmine Schröder, Beethoven was advised not to conduct the performance. He hesitated for a few days, but then announced his intention to conduct the performance with the help of the first violinist Umlauf. During rehearsal, the overture went well but at the first duet it became clear that Beethoven heard nothing of what was being sung on the stage. “He slackened his beat and the orchestra obeyed; the singers urged the movement onward. Umlauf stopped the performance but gave no reason to Beethoven.” It was now clear to everybody that Beethoven was not fit to conduct his work, but nobody was willing to tell him the truth. 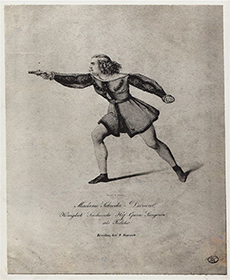 Wilhelmine Schröder-Devrient as Fidelio in 1822

Beethoven was confused and eventually handed his notebook to his friend Schindler, who wrote, “Please do not go on; more at home.” Schindler reports, “Without stopping Beethoven ran towards his lodgings, Pfarrgasse. Inside he threw himself on the sofa, covered his face with his hands and remained in this attitude till we sat down to eat. During the meal not a word came from his lips; he was a picture of profound melancholy and depression.” When Wilhelmine Schröder later wrote an account of her debut, she remembered, “With a bewildered face and unearthly inspired eyes, Beethoven was waving his baton back and forth with violent motions, he stood in the midst of the performing musicians and didn’t hear a note! If he thought it should be “piano” he crouched down almost under the conductor’s desk and if he wanted “forte” he jumped up with the strangest gestures, uttering the weirdest sounds…I found him at the performance on the following night sitting in the orchestra lost in profound thought. He followed the whole performance with eager attention, and he looked as if he were trying to see from each of our gestures whether we had even half understood him.”