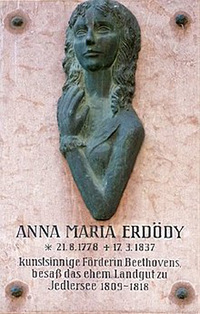 A plaque affixed to the wall of a house in Jedlesee, Vienna, commemorating the residence there of Anna Maria Erdödy

Beethoven’s earliest documented contact with the Countess Anna Maria Erdödy dates from the year 1808, however, it is almost certain that he had become acquainted with her much earlier. The Countess was a competent pianist who had been living in Vienna since 1803, and she resided in a building located at Krugerstrasse 10. That building complex had previously been the property of the Vienna Councilman Hieronymus Raidt, and in the 18th century it became the home of the Russian diplomat Count Galizin. The Count was a great supporter of the arts, and we know that Mozart played several concerts at that location. And we also know that after the death of her husband, Constanze Mozart, as well as Josef Haydn rented quarters at that address. The house was bought by the Esterházy family in 1810, and later became the property of Count Erdödy. The building was badly damaged during the Second World War and had to be demolished. The current reconstruction dates from 1954. 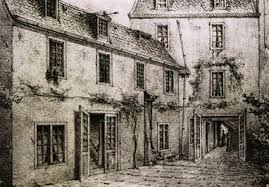 In 1808, Beethoven was ready to leave Vienna. He was no longer the only pianist sensation in town, and he was seriously upset with the Viennese popularity cult surrounding Rossini. It was the Countess Anna Maria Erdödy who finally convinced him to stay put by offering Beethoven several rooms in her apartment in the winter of 1808. Countess Erdödy frequently held musical soirees, and Beethoven played some of his compositions and also improvised. 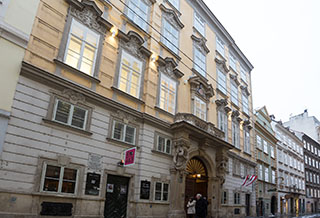 The composer Johann Friedrich Reichardt, who was staying in Vienna at that time, described the countess as “a very pretty young woman, who, despite a chronic ailment, was of a very cheerful disposition.” Beethoven was clearly very fond of the countess, but he was neither in love with her, nor did she turn out to be his “Immortal Beloved.” However, it was probably Erdödy who negotiated with the Archduke Rudolph, with Prince Kinsky, and with Prince Lobkowitz for an annual stipend for Beethoven. Their relationship became seriously strained in the spring of 1809, when a dispute over a servant—no surprise there—led Beethoven to seek new lodgings. However, the quarrel was short-lived as Beethoven dedicated the two Piano Trios Op. 70 to the Countess.