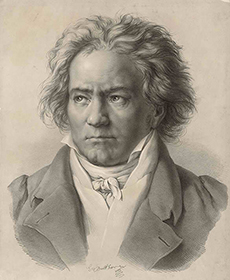 Between 1815 and 24 April 1817, Ludwig van Beethoven resided at quarters in Sailerstätte No. 1055/6. It was a lofty and narrow house, and Beethoven had an apartment on the 3rd flood. Some of his rooms were positioned towards the internal courtyard, but the nicer rooms on the other side looked over the old city wall and the moat. Across the Glacis, Beethoven would have seen the little “Wien” river with the suburb “Landstraße” in the background. We have some ideas of the interior of this apartment related by Beethoven’s student Carl Friedrich Hirsch, who came to his place of residence twice or three times a week to take lessons in harmony. “At home,” Hirsch writes, “Beethoven worked in a flowery dressing-gown, outside the house he wore a dark green or brown coat with gray or dark trousers to match. In his rooms there was the greatest disorder, notes, sheets, books lying partly on the desk, partly on the floor. Now and then the master used spectacles for reading but he did not wear them continuously.” 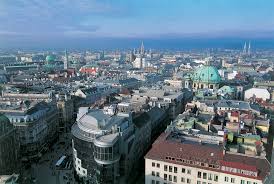 The apartment also housed two pianos, “first an old five-octave, two stringed instrument made of cherry wood, and then a six-octave mahogany that was completely out of tune.” Hirsch also described Beethoven’s appearance in considerable detail. “Of powerful build, his face was a healthy red, his eyebrows very thick and his brow low. His nose was very big and broad, especially the nostrils which were finely shaped. His bushy thick hair was already partly gray and stood up from his face. His hands were coarse and stout, his fingers short, the veins on the back of his hands thick, and the nails cut short.” By this time Beethoven was profoundly deaf, and he had to watch his student’s hands very closely. When they made mistakes, he would get very angry, “become red in the face, and the vein in his temples and forehead would become swollen.” According to Hirsch, “he would occasionally give his students a severe pinch through indignation or impatience,” and he once hit Hirsch in the shoulder.” Preoccupied with matters relating to the custody of his nephew Karl, 1817 was completely barren in respect of completed major works. However, Beethoven did managed to complete the Piano Sonata Op. 101 in November 1816 at that location.