Mexican conductor Alondra de la Parra has made waves as the first ever Music Director of the Queensland Symphony Orchestra. Born in New York, she has worked with orchestras all over the globe, including the Berlin Radio Symphony, São Paulo Symphony, London Philharmonic and Swedish Radio Orchestras.

Alondra started playing the piano aged 7, and picked up the cello at 13 before getting interested in conducting a couple of years later.

‘It was always very clear to me, since I was very young, that I wanted to be a conductor and wanted to live my life in music,’ Alondra says. ‘I’m very lucky in that regard that I never had a doubt!’

Asked if there was one particular encounter that inspired her to take up music, she replies, ‘Not really. I think it was just my overall upbringing in music, that I was always going to concerts and listening to music at home – it was just there.’ 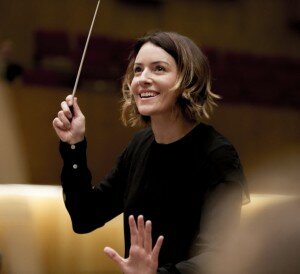 Alondra was appointed Music Director of the Queensland Symphony in 2017, a position that comes to an end this year. During that time, Alondra has included works of all styles and periods, and introduced audiences to less familiar soloists.

‘We’ve had a great time – we’ve been able to establish a really good communication between the players and the artistic team. They’re very much involved in suggesting repertoire for the season even though it’s my responsibility in the end. I really love talking to them and getting their ideas and feedback, and it’s worked really well.’

At the end of her tenure in Australia, Alondra is focusing more of her time on work in Germany, in particular Berlin, where she is now based. Of the QSO, Alondra says ‘they will always be my Australian family, and I of course wish to go back. It’s not so easy with my children to go that far, but we will continue to work together for sure in future seasons.’

Alondra is often cited as ‘championing’ the music of Latin America, but to her, it’s just the same as other music. ‘That’s been just one part of my work,’ she says. ‘Because I’m Mexican I think people have associated me with that repertoire, but to be honest my main focus is more the beginning of the twentieth century – Mahler, Stravinsky, Shostakovich, Bartók, Debussy.

‘I love including the repertoire of Latin America, and I love the music of my country, but I don’t think that’s the only thing I want to do. I just like combining them with composers from other times and countries.’ 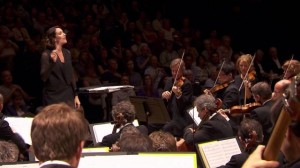 A quick glance at Alondra’s upcoming concerts yields a crop of concerti with less familiar instruments as soloists. Was this something intentional?

‘It’s absolutely been conscious. In Brisbane this season we have a clarinettist, a violist, an oboist, a double bassist, harp, guitar… all these beautiful rare creatures that rarely get showcased as soloists. For me it was very important to share with the Brisbane audience that it doesn’t have to be a violin or a piano or a singer, and that really it doesn’t matter, that what matters is the level of the musician and the level of the music.

‘It was done to break the silly stereotype, and the fear of programmers that if you don’t have a pianist you won’t sell tickets. It’s worked very well, sold very well, and people are getting to know different instruments and different soloists. For me it’s very important to have that variation and contrast.