Without experience in front of an orchestra, without opportunities to learn the craft, women conductors have had little hope of being hired until very recently. Today conservatories, colleges, and festivals include conducting curriculums, and more women are being accepted into these programs. Women are also winning auditions and fellowships that allow them to participate in International masterclasses and seminars. For the first time this year women conductors are being featured in lots of unexpected places including at the Oscars. Irish composer and conductor Eímear Noone has been invited to lead the 42-piece orchestra at the awards ceremony in February, performing excerpts from films nominated for best musical scores. 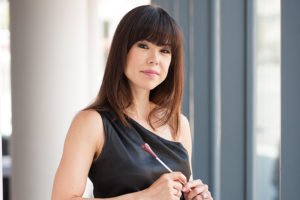 Several orchestras have been providing opportunities for women by hiring them as assistant conductors or advisors. The Minnesota Orchestra has had a female conducting presence for several years. Sarah Hicks, born in Tokyo and raised in Honolulu, was for three seasons the orchestra’s assistant conductor. The principal conductor of pops and presentations from 2009 to 2013, she’s worked her way up in the organization and currently directs Live at Orchestra Hall, a series of popular music, jazz, world music, Broadway classics, and movie scores. 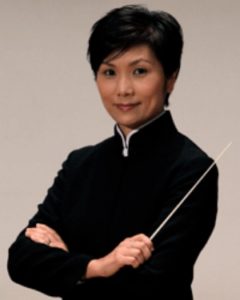 In 2019 two women were hired by the Philadelphia Orchestra. Erina Yashima has been appointed assistant conductor, and Lina Gonzalez-Granados conducting fellow. Prior to that, South Korean, Shi-Yeon Sung became the Assistant Conductor of the Boston Symphony in 2010, after winning the 2006 Sir George Solti International Conducting Competition, and she then held the same position with the Seoul Philharmonic. Canadian Tania Miller served as the associate conductor of the Vancouver Symphony before ascending to the Victoria Symphony and Wing-sie Yip became resident conductor of the Hong Kong Philharmonic in 1986 at the age of 26. She went on to hold the Principal Conductor position at the Guangzhou Symphony and now is Music Director of the Hong Kong Sinfonietta. Ms. Gemma New is currently associate conductor of New Jersey Symphony. Other organizations, are trying to rectify the situation as well. The Welsh National Opera has recently inaugurated a female Conductor in Residence role and have appointed Tianyi Lu to fill the position.

Many of the hot young conductors we’ll feature in this series made their start by winning competitions and/or serving in these roles before launching to stardom. 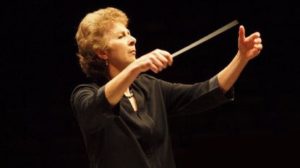 A Grande Dame of women maestros, Jane Glover, helped pave the way for these successes today. Born in 1949 in Britain, she is an outstanding musician, conductor, author, musicologist, and radio host. An expert in Baroque and Classical music, primarily of Mozart, Handel and Haydn, she’s the author of highly acclaimed books Mozart’s Women which looks at the women in Mozart’s life and their influence on his music, and Handel in London: The Making of a Genius. Glover never tires of the repertoire. “Mozart always challenges you and shows you new things every performance.”


Glover came to Chicago for the first time in 2000 to lead a production of Monteverdi’s L’Orfeo at the Chicago Opera Theater. Coincidentally, one of Chicago’s premier ensembles, Music of the Baroque, was looking for a music director. Glover returned to Chicago to conduct a series of concerts during 2001-2 season as one of seven candidates being considered for the position. She won.

Glover began her tenure as Music of the Baroque’s director in 2002. The 32-member orchestra, draws from the top musicians from the Chicago area, members of the Chicago Symphony, The Lyric Opera of Chicago, and the best freelancers. Combined with a 26-member chorus they delight audiences with their nimble and collegial way of playing. Known to be a “happy” ensemble, Glover has an impressive rapport with the musicians, due to her masterful technique, deep knowledge, and communication and rehearsal style. The musicians say she is eloquent, funny, and unassuming.

Well before that she had a wealth of experience as a leader and scholar. Glover served as artistic director of the London Mozart Players from 1984-1991, chorus master at Glyndebourne, and principal conductor of the London and Huddersfield Choral Societies. From 2009-2016 she ensured the future of the next generation of musicians as the Director of Opera at the Royal Academy of Music in London. 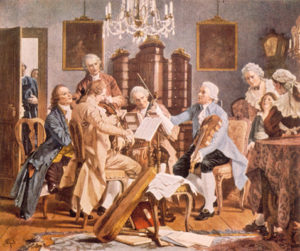 The Haydn Quartet by Julius Schmid

Glover credits Benjamin Britten with changing her life. When she was a 13-year-old girl, her family lived close to the great cathedrals in England. The family, anxious to get good seats for a performance of Elgar’s Dream of Gerontius, went early and happened upon a rehearsal for a concert the following evening. Transfixed by the music from the vast orchestra, soloists and boys choir, Glover begged to hear that performance. Britten’s War Requiem changed her life. From then on, she listened to as much of Britten’s music as she could. Three years later Britten and Peter Pears came to her town to perform. Glover met the distinguished, elegant pair. Astonished Britten would take an interest in a “fat schoolgirl who knew his music” she marveled at receiving tickets to a performance of Peter Grimes from him for her birthday, and an invitation to the Aldeburgh Festival. While she assisted with odd jobs there, she witnessed the hard work of performing music at the highest level. To this day Glover conducts his music as often as possible.


In 2013 Jane Glover became the third female to conduct at the Metropolitan Opera in their 133-year history (preceded by Sarah Caldwell, and Simone Young in 1996). She made her debut with the New York Philharmonic in Handel’s Messiah in December of 2015 getting rave reviews. 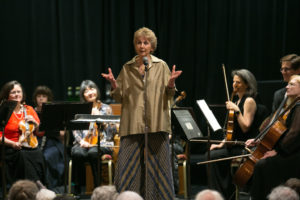 This year, in addition to several programs with her ensemble, she’s on to extensive projects—Mozart: Exsultate Jubilate, with the Helsinki Philharmonic Orchestra, Mozart: Die Zauberflöte, with Houston Grand Opera Company, a Beethoven 250 Celebration at the Trasimeno Music Festival, Perugia, Italy, Handel at the Mostly Mozart Festival, New York City with the Mark Morris Dance Group, and then she moves on to orchestral appearances at the Blossom Music Festival with the Cleveland Orchestra, St Louis Symphony Orchestra, ending the year 2020 with the Chicago Symphony Orchestra.


Will she retire, now that she’s 70? In an interview in Early Music America, she said to Kyle MacMillan, “For as long as the music is of the quality I hope and believe we’ve been making and we’re all enjoying, I want to carry on. It’s sort of the favorite thing I do, and that’s saying something, because I do have a fabulously varied musical life.” That is an understatement.