Conductor Simone Young, the soon to be first female music director of the Sydney Symphony, and currently the orchestra’s Chief Conductor designate, has been in the news recently. On March 1st, she will lead London’s best Australian musicians to raise funds for the recent climate disasters in her native country.

Ms. Young has quite a career. Named Limelight’s 2012 Music Personality of the Year, she established herself as an opera conductor in the 1980s with Opera Australia, working her way up from her role as répétiteur, the rehearsal accompanist and coach, to chief conductor in 2001. 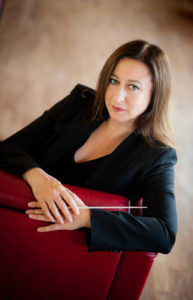 Young began her international career in earnest in Germany, becoming the Artistic Director of the Hamburg State Opera and Chief Music Director of the Hamburg Philharmonic from 2005 to 2015, an orchestra with a prominent history. She made her debut with Strauss’ Elektra, a massive undertaking, and has become known for her performances of diverse repertoire—everything from Mozart to contemporary music, while specializing in the operatic works of Wagner and Strauss. It’s considered quite a marathon to perform Wagner’s entire Ring Cycle, Der Ring des Nibelungen—four epic music dramas, about 15 hours total—but she has, multiple times, at the Vienna Opera House, and she’s recorded the complete cycle with the Hamburg Philharmonic. Young also has been a guest with the Staatsoper Unter de Linden in Berlin, Opéra National de Paris, the Royal Opera House Covent Garden in London, and the Metropolitan Opera in New York, when she was well-along in her pregnancy with one of her daughters. 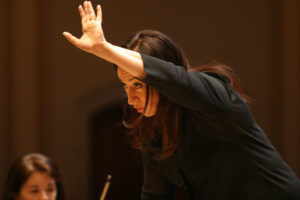 So, we have to wonder, why haven’t we heard more about her until now? My guess would be, Young dedicated herself to her first love, opera, and we in the orchestral world rarely overlap conductors. Also, she had limited availability to guest conduct in other centers having undertaken multiple roles in Hamburg.

Young conducts unapologetically, without being self-conscious, allowing her long tresses to flow freely, sometimes wearing sleeveless and lower cut dresses, and not the high-collar, boxy suits one might expect. Her choice of repertoire, although oftentimes powerful, even muscular, Young unabashedly creates the aura needed for music-making focusing on expressing the direction, mood, and structure of the music rather than feeling constrained due to being a woman. 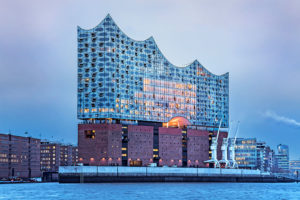 Young hails from a non-musical family. Born in 1961, she became a music student during the days the extraordinary Sydney Opera House was being built. She recalls taking the ferry across the bay to her home, and saying to herself one day she’d perform there. When Young traveled to Europe to study and then conduct in Germany, she had to adapt quickly to being the youngest, the lone woman, and the only Australian. She learned the language by watching US television reruns dubbed in German.

German society favors tradition, yet she began to guest conduct major German orchestras and was the first woman to conduct the venerable Vienna Philharmonic in 2005, just a few years after the first woman was appointed to play in the orchestra. The year was 1997. A harpist was appointed, and women were finally allowed to audition. Today of the Vienna Philharmonic’s 145 members 15 are women.

Having grown up on a remote island, surrounded by the ocean, Young feels inspired by the sea as many artists, composers, and musicians have been before her. Hamburg lies on the Elbe River. The port city, the birthplace of Johannes Brahms, has an impressive cultural life with 40 theaters, 60 museums, and 100 music venues. Landing this position, in the second largest city in Germany, (now the home of the newly completed Elbphilarmonie concert hall), was a major coup for any conductor let alone a woman.


Initially, the musicians of the Hamburg Philharmonic had their reservations about a female maestro, but Young convinced them. The musicians found her insightful, energetic, and expressive, and she commanded their respect. Her audiences too, were quite won over. Few eyebrows were raised when her husband became the stay-at-home parent.

The number of recordings Young has made is astonishing. In addition to Wagner, she has recorded Hindemith’s Opera, Mathis der Maler, the complete Bruckner and Brahms Symphonies, Mahler’s Symphony No. 2 and No. 6, and Poulenc’s Le Dialogue des Carmelites.

Since leaving Hamburg, she has focused on the life of a freelance conductor. With her home base in the UK where her daughters live, she is relishing taking advantage of the offers coming her way from all over the world.


Currently the Principal Guest Conductor of Chambre de Lausanne, this season she will be leading orchestras worldwide including, Paris, Madrid, Minnesota, Tokyo, and Helsinki, amid debuts with the San Francisco and Chicago Symphonies, and she’ll be returning to the Vienna Staastoper and Berlin State Opera. After filling in at the last minute for an ailing Jaap van Zweden last year, conducting Mahler’s massive Symphony No 6, she returns to lead the New York Philharmonic in January of 2020.

What does such a busy musician do for fun? She’s hung up her scuba diving gear for reading, knitting while watching Netflix, and is a fan, like many Aussies, of cricket.

More extensive interview in her roles as opera and philharmonic music director and general director in Hamburg. At 8 minutes in one sees her conducting…