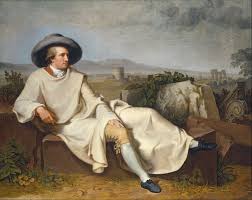 Johann Wolfgang von Goethe (1749-1832) wrote his famous poem “Das Veilchen” (The Violet) in 1774 as an allegorical song for his theatrical play with songs Erwin and Elmire. He reworked it during his Italian journey in 1787/88, and this second version became the basis for a highly valued musical setting by Johann Friedrich Reichardt in 1793. The text tells of how a young woman tramples on the affections of a sincere young suitor, only to realize her mistake and be united with him in the end. She sings this song in recognition of her mistake, the violet being a metaphorical stand-in for the crushed and crumpled young man who nonetheless remains true in his feeling for her. At least that’s one way of looking at it, as more recent literary scholarship has discovered a distinctly lesbian twist to the relationship, but I let you be the judge.

A violet was growing in the meadow,
Unnoticed and with bowed head;
It was a dear sweet violet.
Along came a young shepherdess,
Light of step and happy of heart,
Along, along
Through the meadow, and sang.

Ah! thinks the violet, if I were only
The loveliest flower in all Nature,
Ah! for only a little while,
Till my darling had picked me
And crushed me against her bosom!
Ah only, ah only
For a single quarter hour!

But alas, alas, the girl drew near
And took no heed of the violet,
Trampled the poor violet.
It sank and died, yet still rejoiced:
And if I die, at least I die
Through her, through her
And at her feet. 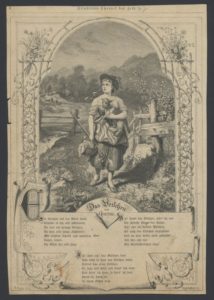 We don’t know for sure where Mozart encountered this poem, or whether he even knew the name of the poet. In the event, it is Mozart’s only setting of a Goethe poem and it was completed in Vienna on June 1785. Although the poem is written in three stanzas, Mozart does not compose a strophic setting, but creates a through-composed work that pays close attention to the text. Subtle changes of inflection, modality, and vocal contour emphasize the tragic irony of Goethe’s simple poem. Mozart’s setting, as has been claimed by some musicologists, creates a psychological mini-drama, that is reinforced by Mozart adding the following lines at the end of Goethe’s poem.

Poor little violet!
It was the sweetest violet. 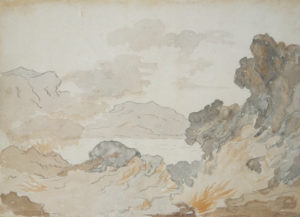 Mozart’s setting is deceptively simple as he composes a light folk melody to carry the poem. However, he adds various sigh motives and dramatic pauses, thereby turning this little song into a miniature operatic love scene. His setting foreshadows the direction lieder composition would take under the influence of a new generation of poets. 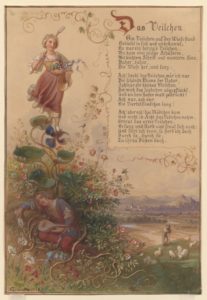 Clara Schumann composed her setting of Das Veilchen in 1853. From the very beginning, it seems that Schumann was secretly looking at Mozart’s setting. She composes a light-hearted folk melody for the text, and a jolly interlude indicates the bouncy walk of the shepherdess. These foreground similarities, however, should not distract from the fact that Clara identified with the suffering violet. The erotic fantasies in verse 2 are set in the minor key, and the trampling of the violet is rhythmically reinforced. There is no humble cheering at the end, and unlike Mozart’s setting, there is no comforting afterword to soften the tragic element. In his 1908 setting, Nicolai Medtner also identifies with the lovesick violet. He subtitled his setting “Ballade,” as he was looking to express a story narrative. On one hand, his portrayal is comically extravagant, but the musical expressions are full of agony. He sets the text in the unusual key of E-flat minor, and concurrently in a waltzing triple meter. And just listen to what happens in the music when the shepherdess steps on the flower. Some commentators have suggested that the “poor flower is being run over by a battle tank.” 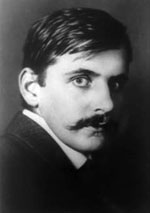 The Swiss composer and conductor Othmar Schoeck (1886-1957) worked Goethe’s singspiel Erwin and Elmire into an opera, and it was first premiered in Zurich in 1916. Schoeck’s opera is based on the reworked version that Goethe fashioned during his Italian journey in 1787-88, and the composer emphasized “his music for it was in itself not dramatic.” Schoeck was looking at the text as a quasi comedy, and he “regretted that he did not subtitle the overture with ‘Cappriccio,’ for it represents the capriciousness of a girl who always is changing her moods.” The “Interlude” conveys the sense of Erwin’s sorrowful solitary life, and the self-contained vocal numbers are integrated into the drama. The work is composed for four vocal soloists and an orchestra of assorted instruments, and when Elmire sing the “Veilchen,” a piano of spinet is to be set up on the stage to accompany her. Schoeck is rather matter-of-fact in his setting of this poem as the process of love and loss are transitory and will repeat over and over. For Schoeck, there is no room for hyper-Romantic sentimentality, as he chose to end his work in the manner of a comedy by setting the final verses as a trio.