Cuban conductor, pianist, composer, and educator, Tania León, is another woman who deserves the honorific ‘Grande Dame’ for her outstanding talents and remarkable career. You may not know she became the New York Philharmonic’s new-music advisor in the 1990s. This year she is one of 19 women composers commissioned by the Philharmonic to write works in honor of the 100th anniversary of women’s suffrage. But before and between these accomplishments, her life took on a spectacular trajectory.

Born into a humble family in Havana in 1943, her prodigious talent was immediately recognized and supported. León’s grandparents bought a piano for her and enrolled her at the music conservatory even though she was just four years old. Throughout her childhood she heard and read about great artists and dreamt of becoming a pianist. Wisely, her family insisted she acquire not only her degree in music but also accreditation as a CPA. 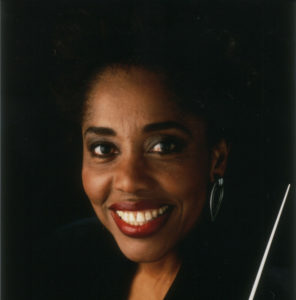 After graduating from the conservatory, León had laudable but seemingly impossible goals—to study with Madame Boulanger in Paris, become an internationally known concert pianist, and help her impoverished family. After waiting years, León landed a free ticket to Miami as a refugee in 1967 on a “Freedom Flight” for Cubans hoping to achieve their American Dream. León had a connection to France, but discovered she wouldn’t be able to return to Cuba without gaining U.S. citizenship. Since León would have to live five years in the United States, she decided to go to the center of musical action, New York. “Are you crazy?” her friends said, “You don’t even speak English!”

León found work as an accountant while she prepared to audition for the New York College of Music. She won a full scholarship. León practiced and studied English at NYU but becoming a pianist and working with Boulanger was still her dream. Within one year of arriving to the US everything changed.

One day, a pianist friend, too ill to accompany a ballet rehearsal, asked León to substitute for her. In the large room between classes, all alone, León improvised on the piano. A figure appeared. He listened to her for several moments. Little did León know this man was none other than The New York City Ballet dancer Arthur Mitchell, who was starting a new company, the Dance Theater of Harlem. It was serendipitous. Mitchell asked León to play for four dancers without any music in front of her. They all enjoyed her early attempts at writing a ballet. León had never imagined herself as a composer but after the success of her ballet Tones she resolved to study music composition. One of the highlights of her career was having the great soprano Marian Anderson narrate one of her ballets.

León became the organization’s co-founder and first music director, at the height of the civil rights movement, a position she held from 1969-1980. Soon she began collaborating with the likes of dance geniuses George Balanchine and Jerome Robbins. While she was composing ballets, León began to study conducting. She worked with Leonard Bernstein at Tanglewood and with Menotti in Europe. The Dance Theater of Harlem, became hugely popular, and ultimately toured Europe including Paris. León finally arrived in the city she fantasized about as a child.

From 1993-1997 León was appointed the New Music advisor of the New York Philharmonic during the tenure of Maestro Kurt Masur. Since then León has conducted prestigious orchestras including Bonn’s Beethovenhalle Orchestra, the Leipzig Gewandhausorchester, the National Symphony of South Africa, and the Netherlands Wind Ensemble, as well as the New York Philharmonic. She is the Tow Distinguished Professor of the Conservatory of Music at Brooklyn College and is the recipient of numerous awards. 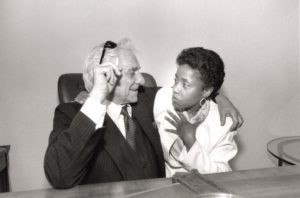 As if she wasn’t busy enough, in 2008 León served as U.S. Artistic Ambassador of American Culture in Madrid, Spain, and that year she was composer and conductor in residence at the Beijing Central Conservatory of China. She was inducted into the America Academy of Arts and Letters in 2010.

León has dedicated herself to promoting cultural diversity. She became the Latin American Music Advisor and conductor of the American Composers Orchestra. She conducted the Brooklyn Philharmonic in outreach programs, spearheaded festivals of Latin American music, was the music director of the Broadway hit The Wiz, and in 2010, she founded and currently directs Composers Now a festival dedicated to empowering “all living composers, celebrating the diversity of their voices…” in performances, residencies, and dialogues, in venues all over New York. The 2020 season features a remarkably comprehensive and mindboggling number of performances, and these are just the concerts in February—everything from the Atlantic Chamber Players, the Philip Glass Ensemble, Elio Villafranca & The Jass Syncopators, violinist Lara St John, The Harlem Chamber Players, and dance, and electronic music programs.

To celebrate its 50th anniversary in 2019, the Dance Theater of Harlem, now an international touring company and school, featured the very first piece León composed. Her commissioned work Stride for the New York Philharmonic’s Project 19, Jaap van Zweden conducting, took place this past February. What a ground-breaking odyssey.

León’s remarkably prolific composing career, and her work as a pianist, and conductor have been sustained by an artistic vision to initiate dialogue, and to create a more compassionate world. León’s unique mix of identities as a musician and as a person, offers us the opportunity to look beyond labels and to see her as the remarkable artist she is.