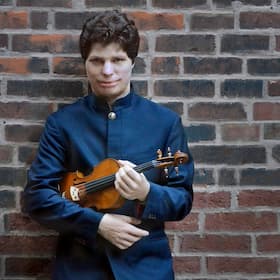 The Schubert Club of Saint Paul Minnesota opened its 2021-22 International Artists Series on November 2, and 3, featuring violinist Augustin Hadelich and Orion Weiss. My expectation was that it would be a great evening. Finally: a live concert. I was looking forward to Hadelich’s superb and thrilling playing not anticipating that during this concert, we collectively would feel like we’d taken a trip to paradise!

Hadelich is known for his alluring tone and passionate interpretations of the great concertos. I especially love his rendition of the Barber Violin Concerto. But sometimes stellar soloists are not necessarily fine chamber musicians and it doesn’t always follow that two great artists will have a rapport that leads to a superb collaboration. Playing chamber music requires a relationship that includes teamwork, cooperation, mutual respect, and being “on the same page” musically. Augustin and Orion met about a decade ago and played chamber music together at various festivals across the country. They had an immediate connection and committed to trying to perform recitals together. 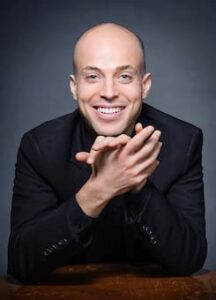 American pianist Orion Weiss has performed all over the globe as orchestral soloist and chamber musician. The winner of several awards including an Avery Fisher Career Grant, Weiss’ dynamic playing, the shades and dynamics in his sound, and his formidable technique matches well with Hadelich—whose mastery, lush tone, and arresting interpretations are on a plane not often encountered in even the most accomplished soloists.

Their partnership seemed easy. Hadelich stood to the right of the pianist hence Weiss’ back was facing the violinist. Did they have eyes in the back of their heads? Their ensemble was quite impeccable including beautifully timed pauses and ritardandos.

The beautifully and thoughtfully put together program included:
Igor Stravinsky: Suite After Themes, Fragments and Pieces by Giambatista Pergolesi (1925) Taken from his one-act ballet Pulcinella this is virtually the same piece known as the Suite Italienne but it’s the original version written by Stravinsky. This work has joy and quirkiness that is quintessential Stravinsky. Hadelich has a special affinity for the piece as this was the first piece he performed as a child. The piano gently caressed as Hadelich played with classical delicacy and purity of sound, with harmonics smooth as silk, and clear articulations. 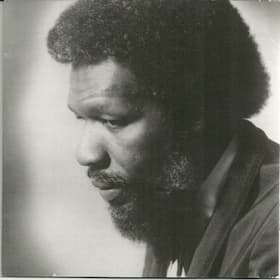 Next was a solo violin piece by Coleridge-Taylor Perkinson: Blue/s Forms. Not to be confused by the poet Samuel Taylor Coleridge, or Victorian composer Samuel Coleridge Taylor, African American composer Coleridge-Taylor Perkinson (1932-2004) played the violin and Blue/s Forms was written in the 1970s as a natural result of improvisation inspired by blues. The piece sounded to me a bit like Ysaÿe’s solo sonatas, full of double stops and flourishes, which Hadelich has recorded (and they are fantastic.) The second movement calls for muted violin and the two artists achieved a heavenly ethereal sound. Hadelich believes it is extremely important for a soloist to champion musical works as it influences more students and other players to play them. During the lockdown Augustin researched works he didn’t know and he found he was “blown away” by the music of Perkinson. Hadelich often plays an encore by this composer his lively Louisiana Blues Strut.

Maurice Ravel – Sonata for Violin and Piano followed with its Moderato second movement: Blues. It was so interesting to hear the relationship of the previous work to Ravel who was very open to the influences of jazz and other styles of music. Hadelich dazzled with fancy bowings, and two-handed pizzicatos while Weiss played perfectly balanced, playful, and nimble counterpoint. It is utterly light and ethereal and the two instruments are quite independent. Every note uttered by both the violin and the piano was crystal clear.

The massive sonata by Ludwig van Beethoven, his ninth of ten sonatas – “Kreutzer” Violin Sonata No. 9, Op. 47 in A Major, a tour de force for both instruments, took up the second half of the program. Not only is it lengthy—about forty minutes, the piece is technically and emotionally demanding, dramatic, and virtuosic.

Beethoven himself performed for its 1803 premier in Vienna although it was barely completed in time for the concert. The sonata was written for his friend the 25-year-old extraordinary violinist of mixed race, George Augustus Polgreen Bridgetower who sight-read the concert. For reasons not clear, but may have been due to exchanging insults about a woman, Beethoven, furious, scratched out his dedication to Bridgetower and replaced it with the eminent violinist and pedagogue Kreutzer (who actually never performed the piece calling it “outrageously unintelligible.”) Bridgetower never got over it. Since the publication of the work, the Kreutzer Sonata has inspired other artworks including a novella by Leo Tolstoy, a painting by René Xavier Prinet, and a string quartet by Janácek.

Augustin Hadelich played the entire sonata from memory. The piece begins Adagio sostenuto, slow and questioning, then moves into a Presto often mysterious and quite ferocious, with both pianist and violinist playing with bravura flair. The fluidity and effortlessness in Hadelich’s bowings and the dynamic range achieved by both artists was marvelous. Weiss gave the right gravitas to the massive chords and breathless piano lines. The fermatas or pauses had impeccable timing and the finale—a presto tarantella—literally seemed to detonate with the astounding, gutsy playing.

What a joy to hear these artists live. It was equally evident that they were thrilled to be playing for an audience and one so attentive and knowledgeable. They are a perfectly matched duo. Listen yourself to a recent Library of Congress recital.

Hadelich and Weiss in recital at the Library of Congress includes Beethoven Kreutzer sonata (27:21) and Debussy Isaac Albéniz and Sarasate