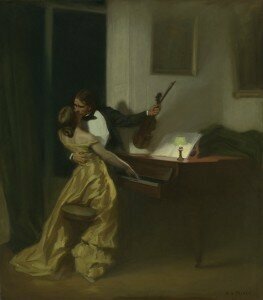 “Music carries me immediately and directly into the mental condition in which the man was who composed it. My soul merges with his and together with him I pass from one condition into another, but why this happens I don’t know.”
― Leo Tolstoy, The Kreutzer Sonata

Published in 1889, The Kreutzer Sonata is a novella by Leo Tolstoy, named after Beethoven’s Kreutzer Sonata for violin and piano, Op. 47. It was immediately censored on publication for its “indecent character”. The book explores notions of sexual appetite and the ideal of abstinence in a dramatic and passionate story told through the protagonist Pozdnyshev, who murders his wife after he become jealous of her relationship with a musician, with whom she plays Beethoven’s groundbreaking ‘Kreutzer’ Sonata. The narrative reflects Tolstoy’s fervent Christian ideals, his conflicts with lust, carnal love and the hypocrisies of nineteenth-century marriage, the rights and position of women in marriage and society in general, and his views on the role of art and music in society.

Tolstoy’s controversial view on sexuality – that physical desire is an obstacle to good relations between men and women and may result in tragedy – is reflected in the principal theme of the novella’s narrative: the corrupting power of sex and attendant jealousy. For his protagonist, Pozdnyshev, and Tolstoy alike, sex is regarded as repulsive and destructive, even within marriage, and Pozdnyshev’s story serves to highlight this by suggesting that sexual love degrades a human being and results in hostility to others and to one’s self. The title of Tolstoy’s novella suggests that music provokes lechery, especially in the context of Beethoven’s sonatas, which are often characterized by their intensity of feeling and striking, sometimes violent, contrasts of emotion and mood (certainly true of Beethoven’s Op. 47); thus Beethoven’s music becomes a metaphor for passion and uncontrolled sexual desire.

Pozdnyshev and his wife have a stormy, passionate marriage. He grows to hate her yet still lusts after her. Meanwhile, she is drawn to a violinist called Trukachevsky after he takes up Pozdnyshev’s invitation to visit their house. Trukachevsky plays Beethoven’s Kreutzer Sonata, with Pozdnyshev’s wife accompanying him on the piano. Believing that music, the infamous aphrodisiac, causes adultery, and recalling the absorbed expressions on the faces of his wife and Trukachevsky as they play this passionate, dramatic sonata, Pozdnyshev becomes convinced that his wife is having an affair with the violinist. Returning home after a trip, he expects to find his wife in bed with Trukachevsky, and plans to kill them both. Instead, they are in the drawing room after they have played some music. Enraged nonetheless by his uncontrollable jealousy, Pozdnyshev stabs his wife after Trukachevsky has escaped.

It’s no accident that Tolstoy selected the ‘Kreutzer’ Sonata out of all of Beethoven’s ten sonatas for piano and violin. It is unusually virtuosic, making equal demands on both pianist and violinist, and has a dramatic scale and grandeur which surpasses the other sonatas. It is notable for its technical difficulty and length (around 40 minutes). Dedicated to the violinist Rodolphe Kreutzer, it was premiered in 1803 by Beethoven and the violinist George Bridgetower; Kreutzer himself declared the sonata “outrageously unintelligible”, and refused to play it.

Charles Rosen in his book ‘The Classical Style’ states: ‘Beethoven never again presented such a hybrid as one work. The finale… seems inadequate… the beautiful slow movement belongs to a totally different style,’ while, ‘the first movement [is] unequalled in formal clarity, grandeur and dramatic force by anything that Beethoven had yet written.’

The Sonata opens with a faux-angry Presto first movement that begins in the major key only to end dramatically in the minor. A movement of almost unceasing agitation and urgent dynamic contrasts, striking originality in the use of pizzicato, which lends it a sense of utter excess, laid over an emphatic motif in the piano. Here Beethoven mixes grand gestures with rough edges and an almost maudlin sentiment, especially in the middle theme and variations movement, which brings an air of undisturbed serenity with a delightful conversation-like cadenza and a leisurely coda before the unflinching high spirits of the last movement, a wonderfully giddy steeplechase, broken only briefly by an expressive, prayer-like theme. It’s a work which stretches the duo sonata genre and marks a change in Beethoven’s compositional style as he sought to introduce new dimensions of expression and innovation in his music. No wonder Tolstoy’s protagonist Pozdnyshev believed this music provoked lustful, adulterous feelings in his wife…….!

Beethoven: Violin Sonata No. 10 – I. Allegro moderato
Beethoven: Violin Sonata No. 2 – I. Allegro vivace
Compare this with Beethoven’s last sonata for piano and violin, composed in 1812, a work whose ethereal beauty and sublime lyricism looks forward to his late style, works such as the last piano sonatas and late string quartets, which seem belong to a future age. Meanwhile, in contrast the early duo sonatas are bold, witty, youthful works, but even here Beethoven is pushing the boundaries of the genre: from the outset he gives both instruments equal status, freely sharing virtually of all the musical material between them. In fact in the early sonatas, the piano has the rather more dominant role, a reminder that Beethoven, a virtuoso pianist, wrote this music to perform himself and there was no way he was going to be outdone by a mere violinist! Each sonata is a gem in its own right, from the warm-hearted ‘Spring’ Sonata (Op. 24) to the rhetoric of the opening movement of Op. 30, but the ‘Kreutzer’ undoubtedly stands out for its unsurpassed drama and emotional intensity.