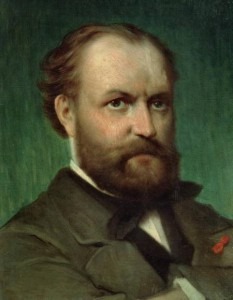 In an interview, conducted by a special correspondent to the New York Times in London on 2 June 1874, Georgina Weldon defiantly declared “according to some authorities, an atmosphere of scandal is not only favorable to the development of musical reputation, but is absolutely essential to it. It is certainly essential to Mr. Charles Gounod, for the marketable admiration he so well deserves, that he should have about him an element of intrigue, contention, and scandal, which I choose to supply”. Georgina’s proclamation to sacrifice herself on the altar of Gounod’s Art, and the unmistakable hint of sarcasm and self-importance contained in her statement, certainly begs the question what kind of entanglements—artistic or otherwise— spawned this very public disclosure.

As is well known, Charles Gounod (1818-1893) had married Anna Zimmermann, the daughter of his former piano teacher in 1852. However, the composer was severely inflicted by what might most aptly be described as “the weakness of the flesh”. To his credit, Gounod conducted his extra-marital expeditions with a great sense of discretion, and meticulously protected the identities of his carnal conquests. That is, until he made the acquaintance of Georgina Weldon, who was not shy in fanning the flames of gossip and rumour. Gounod and his wife had fled the destruction of the Franco-Prussian war of 1870 and sought refuge in the city of London. The composer quickly found a receptive audience for his oratorios La redemption and Mors et vita, which apparently also included Queen Victoria. To his English audiences, Gounod exuded an air of religious mysticism, and women attending or participating in Gounod’s concerts of sacred music “used to look upon them as a sort of religious orgy”. While Gounod was busily working on his latest musical saturnalia—the oratorio Gallia, which featured Georgina Weldon as the soprano soloist—peace was restored in France under the rule of the French Third Republic. Anna Gounod, aware of her husband’s growing infatuation with Georgina packed her suitcases and returned to Paris. Meanwhile, her husband happily moved into Tavistock House, the matrimonial residence of Georgina and William Henry Weldon. 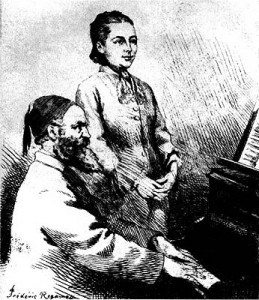 Although Georgina Weldon, née Thomas (1837-1914) was born in South London, she spent much of her childhood in the city of Florence. Her dreams of becoming a professional opera singer were crudely dashed by her father, who also disinherited her for marrying William Henry Weldon, a lieutenant in the 18th Royal Hussars. To her dismay, her husband also had little sympathy for her professional artistic ambitions, and forced her to appear in amateur theatricals, church gatherings and charity concerts. By all accounts, Georgina was rather hopeless as a vocalist. “Her voice is somewhat harsh, her intonation is incorrect, and she is wanting in style; yet in her manner of making false notes there is something perfectly comme il faut!” Having remained childless, Georgina established a National Training School of Music for poor children, and once the couple moved into Tavistock House, she established an orphanage at that residence. Gounod joined the happy household in November 1871, and was allocated a small room at the top of the house. Georgina, it was said, made daily visits to his little chamber, apparently enticing him to compose more music for her. Malicious gossip suggested that she only occasionally submitted to his caresses, while her husband attempted in vain to hide all stringed and woodwind instruments from the little orphans. Yet both Gounod and Weldon benefited greatly from this atmosphere of intrigue and scandal. The composer penned a variety of vocal compositions, which frequently featured Georgina as the soloist. In turn, Georgina arranged for the publication of these compositions with the proceeds going to the aid of the orphanage. In a moment of exulted passion, Gounod even promised Georgina the title role in his new opera Polyeucte, based on a drama by Pierre Corneille.

Charles Gounod: Polyeucte (1878)
Things turned predictably nasty when Gounod hastily decided to return to Paris for a reunification with his wife in 1874. Hoping to publicly shame Gounod, Weldon began to give piquant interviews for members of the press, exposing many things that just as well should have remained private. In addition, she refused to return his belongings, which included the autograph score to the opera Polyeucte. Since Georgina claimed ownership of the composition, Gounod was forced to reconstruct the score from memory. Eventually, the autograph score was returned to him, yet Weldon had scrawled her name diagonally across each page in blue crayon. In addition, she quickly sued him for damages, and the English courts ordered Gounod to pay £10,000 to his former hostess and lover. Since Gounod would never again set foot on English soil, the courts were unable to enforce the judgment, and Polyeucte premiered—obviously without Georgina Weldon’s participation—in October 1878.